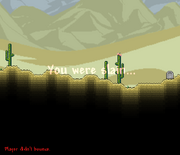 Amikor egy játékos meghal, egy Sírkő elenik meg, ott ahol meghalt. When it finds a suitable space, it will become a 2x2 tile. It stores text, much in the way the sign functions, with the player's Death Message. Being affected by physics, a Tombstone will fall after the player's death if they were moving at the time. If there is no flat 2-block space for a Tombstone, it will get stuck before it despawns.

If the player holds more than 10

when they die, the spawned tombstone will be golden.

Worm Pet is active at death, it will say "bye bye" and the

Strange Looking Tombstone will be dropped.

There will be red text saying “You were slain...” upon death. The amount of coins dropped upon death will be shown underneath.

Death may occur from:

A Softcore character will drop half of the amount (three-quarters in expert mode, both rounded up) of each type of Coins a player is carrying at the moment of death. To avoid heavy losses upon death, be sure to often stash coins in a Piggy Bank (or in a Chest, or other storage containers).

character will drop all carried items, including money and ammo. Any additional max health or mana is not lost.

characters will drop all of their items upon death. The character is deleted upon death and the player turns into a ghost, unable to interact with the environment, but still able to observe, move about, and chat with other players.