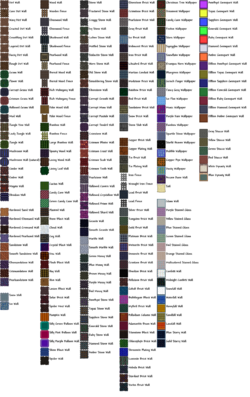 A character placing walls in a house.

Background walls, also just known as walls, are tiles that create backgrounds on top of biome backgrounds. Walls are hidden behind everything else, such as blocks. Natural walls are generated at world creation, being abundant in certain biomes like the Underground Jungle, and are of the main components a Terraria world consists of alongside blocks and liquids. Walls can be removed with a hammer or explosives.

Many wall types exist as items that the player can place in their inventory and then re-place in any area which does not already have walls. Certain mechanics of walls is dependent on which of the following categories they fall under:

Differing safe walls from unsafe walls can be tricky because many walls, such as Obsidian Brick Walls or Dungeon Brick Walls, exist in both safe and unsafe forms. With these walls (both of which are harvestable), the player must break the unsafe walls and replace them in order for them to count as safe walls. Similarly, many (or all, on

) naturally-generated walls have safe counterparts which are obtainable through crafting or purchase from NPCs.

These walls are made by the player using various crafting materials. All crafted walls qualify for housing.

These walls are purchased from various NPCs. All purchased walls except Sail qualify for housing.

These walls can be harvested in various places when exploring the world. Most of them can also be obtained through crafting. All harvested walls qualify for housing.

These walls are normally created by biome spread. They can also be made using Solution sprayed with the Clentaminator, and on the

Mobile version they can also be crafted or purchased (with the exception of the natural Mushroom Wall). On the

The backdrop of the Underground and Cavern layers is a non-removable biome background which does not consist of wall tiles.