The term character or avatar refers to the figure controlled by the player through the game controls. All of Terraria's gameplay revolves around actions performed by the character, and the camera is nearly always locked to place the character in the middle of the screen.

The term player is often used as a synonym with character, but may also refer to the person accessing the game if the topic is unrelated to character mechanics.

Only one character can be played at a given time (in similar fashion to how the player may only access one world at a time), but the player is free to create as many characters as they desire. Characters are not locked to worlds, hence it is, for instance, possible to start playing in a new world with a powerful character from another world.

Items held in any part of the character's inventory (including slots for equipment, armor, ammo, and dyes), or any of the personal portable storage items, are all stored with the character, who will bring them to whatever world they enter. 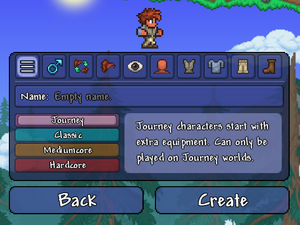 Dialogue for creating a new character on Desktop

Characters are created in the game's main menu through the Single Player option. This provides the player with the options of selecting an already made character for playing, creating new characters, favoriting them, integrating them with the Steam Cloud in order to easily access them on different computers, and deleting them.

Character creation is accessed by clicking "New" and presents the player with a multitude of customization options:

A character using a Sandstorm in a Bottle.