. Chests can be freed with any pickaxe or drill, but only when empty. It is impossible to destroy the blocks underneath a placed chest that contains items.

There are 20 varieties of naturally-occurring chests (15 of which cannot be crafted) and 27 craftable ones, plus the Barrel and Trash Can, for a total of 42 chest types and 44 placed storage items overall (besides dressers and portable storage items).

, as well as showcase items like the Item Frame, Weapon Rack, and Mannequin). Attempts to place additional storage items beyond the max will result in a dropped item, rather than placement.

Mobile versions, placed chests can be renamed (20 character max). Hovering the mouse cursor over a renamed chest will show its name. If the chest has not been renamed, no name will display. To rename a chest, first open it via ⚷ Open / Activate. The default chest name reflects the chest type (e.g. a Living Wood Chest has the default name "Living Wood Chest"). Select "Rename" and enter a new name. Press ↵ Enter or press "Save" when finished. Chest names can also use the same text formatting as Announcement Boxes and chat messages. 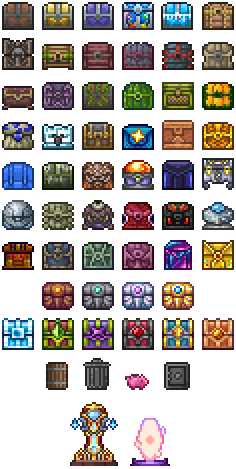 Placed chests, with other storage items. Click the image to view a summary of each row.

Most chests can be crafted into Trapped Chests

, losing their storage capability in exchange of making them a mechanism.

Ordinary Chests that occur naturally on the Surface contain various loot that the player can take and place in their own inventory. Each chest contains a single "rare item" and an assortment of randomly chosen common items.

Note: A Chest can only contain one type of bar, and only the types of which the ore is generated naturally in the world.

This content is transcluded from Gold Chest § Loot.The loot for any given chest is determined by the location in which it is found. Each chest contains a single primary item and an assortment of randomly chosen common items. The primary item is first placed in the chest, then each "set" of common items is checked to see whether or not it will be added. If a set is chosen to be added, a single item from the list is added to the chest.

Sets are displayed in the list below divided by horizontal borders. For example, the Wooden Arrow and the Shuriken both reside in the same set, so they will never both appear in the same chest.