"It reacts to the light"

Chlorophyte Bar
Chlorophyte Brick
Chlorophyte Ore is an ore that can only naturally be found in the Underground Jungle during Hardmode and can spawn at any depth. Once an ore spawns, it spreads in the jungle by converting mud and jungle grass tiles into Chlorophyte Ore. It will attempt to convert dirt blocks into mud when there aren't any available. Unlike The Crimson/Corruption, the Chlorophyte Ores have a spread limit. Too much ore in an area will cause growth to stop.

Chlorophyte Ore requires a pickaxe or drill with at least 200% pickaxe power to mine. The earliest tools available to mine them are Drax and Pickaxe Axe, which are accessible after all 3 Mechanical Bosses have been defeated.

Chlorophyte is one of the most important ores late game. It is used to craft the high-grade armors for Melee, Mage, and Ranger, namely Turtle Armor, Spectre Armor and Shroomite Armor respectively. It is highly recommended to use Spelunker Potions when in search of these ores, as it makes finding them much easier considering they blend in with the green jungle very well. 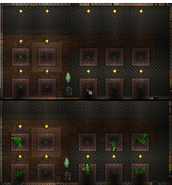 Online glitch before and after world reload

Efficient Chlorophyte Ore farm. A 5x5 Block every 100 ft down the hellevator
Add a photo to this gallery

Retrieved from "https://terraria.fandom.com/wiki/Chlorophyte_Ore?oldid=595656"
Community content is available under CC-BY-SA unless otherwise noted.