Cobalt Bar
Cobalt Brick
Cobalt Ore is a hardmode ore that has a 50% chance of being spawned in a world after destroying one Demon Altar or Crimson Altar. At least a Molten Pickaxe is required to mine Cobalt Ore. 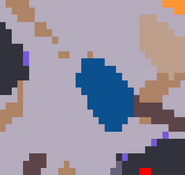 Cobalt Ore as viewed on the map
Add a photo to this gallery
Retrieved from "https://terraria.fandom.com/wiki/Cobalt_Ore?oldid=515464"
Community content is available under CC-BY-SA unless otherwise noted.