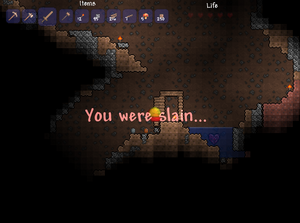 The Death Penalty results when a character has lost all Health Points and prevents players using death as a quick and easy way home. There are three different levels of penalties each dependent upon the character's "difficulty" setting.

As a Softcore (white) character, half of each coin type the character holds (rounded up) is dropped. It is possible to return and retrieve them. The character will spawn with half Health(if 100-160 you spawn with full) and minimal Mana. A character with 1

will lose all his/her money. A softcore player's name and chat are displayed white in the chat.

As a Mediumcore (purple) character, all of the character's items are dropped and he/she respawns with copper tools. It is possible to return and retrieve them. The character will spawn with 100 health, minimal mana, Copper Pickaxe, Copper Axe and Copper Shortsword. A mediumcore player's chat and name are displayed navy blue.

Dying because of an explosion that the player causes will not result in a death penalty. They will respawn with all of their money and Items (minus the explosive used). This is because the explosive is a player thrown consumable, so if a player kills another player with one, they don't get their coins.

Retrieved from "https://terraria.fandom.com/wiki/Death_Penalty?oldid=601185"
Community content is available under CC-BY-SA unless otherwise noted.