Demonite Brick Wall
The Demonite Brick can either be crafted or obtained by killing the Wall of Flesh, who upon death creates a box of 32 Demonite Bricks to protect its other loot from falling in lava. 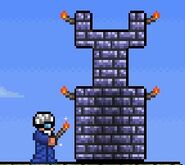 Add a photo to this gallery

Retrieved from "https://terraria.fandom.com/wiki/Demonite_Brick?oldid=550082"
Community content is available under CC-BY-SA unless otherwise noted.