Desktop/Console/Mobile-Only Content: This information applies only to the Desktop, Console, and Mobile versions of Terraria.
Detonator 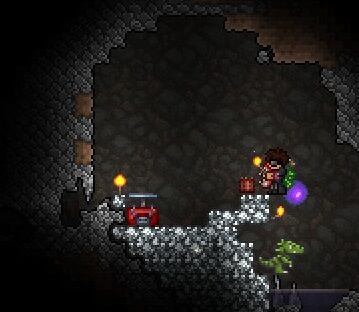 A detonator found naturally in a cave

Detonators are activation Mechanisms that can be found underground as part of Traps, wired to Explosives. They are often found planted on top of suspiciously large veins of underground metals (E.g. Silver).

Detonators act as switches, sending an activation trigger to other mechanisms connected to it through Wire. They are tripped either by right-clicking or when a player falls on the plunger, similar to a Pressure Plate.

Unlike pressure plates, a player has to actually fall from above to trigger a detonator. Even walking off a 1.5 block high column will not work, while walking off a 2 block high column reliably triggers it. This makes explosive traps that use a detonator instead of a pressure plate slightly less dangerous as they are more difficult to trigger accidentally (as well as much easier to see).

A detonator is not triggered by enemies or NPCs falling on it.

The Tooltip 'Guts... and Gory!' is a reference to the famous quote "No Guts, No Glory", which originally came from the book, No Guts, No Glory, written by Major General Frederick Corbin "Boots" Blesse.