ℹ️
100%
Inferno Fork
5%
The Diabolist is an undead Hard Mode monster that spawns in the Dungeon after beating Plantera. It has a 5% drop rate for the Inferno Fork, a powerful magic weapon.

Similar to the Necromancer, the Diabolist casts spells and teleports after every hit he receives. The delay between them teleporting and casting a spell at the player is somewhat longer than with Necromancers. The spell he uses creates a fiery projectile (bearing a resemblance to the Fire Imp's Burning Sphere) that bursts into a large fireball upon hitting a wall. The fireball stays suspended in the air for a few seconds, heavily damaging those who touch it. Unlike the Necromancer, the Diabolist has two forms, the first being the normal form and the second when he has 250 HP.

Diabolists can be extremely hard-hitting, even with a high defense stat. They should be avoided in close corridors if at all possible. Their attacks also cause the On Fire! debuff that can last up to 15 seconds, making them very dangerous even when already dealt with. Weapons that can pass through walls (Death Sickle, Nettle Burst) are extremely effective against them. It is also effective to use the Piranha Gun since it will teleport with him and damage him.The Diabolist only spawns in the Tiled Background area of the dungeon. When farming them or avoiding them, it is ideal to go or evade the area, depending on the situation.

Diabolist in the dungeon 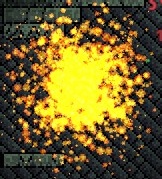 Flame bursts can block your way out, so be careful!
Add a photo to this gallery
Retrieved from "https://terraria.fandom.com/wiki/Diabolist?oldid=571142"
Community content is available under CC-BY-SA unless otherwise noted.