Desktop/Console/Mobile-Only Content: This information applies only to the Desktop, Console, and Mobile versions of Terraria.
Drill Containment Unit 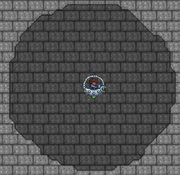 The Drill Containment Unit (often called DCU) is a late-game post-Moon Lord mount that summons a Drill Mount, a rideable, flying vehicle that mines blocks extremely fast via lasers. It is currently the fastest controllable way to mine. It can fly and hover indefinitely, and has a mining range of 15 tiles.

720 Chlorophyte Ore, 600 Glowing Mushrooms, 20 Ectoplasm, 120 each of Hellstone and Meteorite ores, and 40 Obsidian. This also requires four different crafting stations: A Hardmode Forge for the Chlorophyte and Spectre Bars, an Autohammer for the Shroomite Bars, an Ancient Manipulator for the Luminite Bars, and a Hardmode Anvil for the Drill Containment Unit itself.

Because the Drill Mount also slopes blocks as it mines, the number of blocks that are mined will vary.

The Cavalry • “Equip a mount.”
Equip your first Mount.