“An aquatic pigron mutation from the depths of the ocean who surfaces in search of a rare, savory type of worm.”

Fish with a Truffle Worm in the ocean.

“An aquatic pigron mutation from the depths of the ocean who surfaces in search of a rare, savory type of worm.”

Duke Fishron is a Hardmode boss added in 1.2.4. In order to summon him, a player needs to fish using a Truffle Worm as bait at either of the oceans. It can be summoned before or during Hardmode, but it's recommended to have at least post-Plantera gear equipped.

On the 3DS version, Duke Fishron and Ocram are the 2 final bosses because they are still in development and are being updated.

A very good defensive strategy that doesn't require many rare items would be to craft 2 Gravitation Potions, have around 70 defense, acquire the Terra Blade and some Warding accessories. Simply activate one potion and repeat moving from the top of the map to the sea level while swinging your Terra Blade. When Duke Fishron reaches stage 2, the player must try to avoid moving too far away from the boss as it will make it despawn. To do so, while the boss uses one of the spells that makes him stand still, gravity must be inverted. Using this method and some acceptable dodging skills, the player should be able to take out the boss in a maximum of 5 minutes. Without having to farm any Key Molds, it is a very general and effective way of taking down the boss. To defeat him with minimal damage, have some Greater Healing Potions prepared, decent defense (60 or above), and Vampire Knives. Vampire Knives and 60 defense aren't needed if the player has high DPS magic weapons. With the Spectre Hood Set, it's best to use high DPS magic weapons instead of Vampire Knives. It is also best to get a Hoverboard, or build a skybridge with Asphalt Blocks; note that in the PC version this bridge may not lead out of the Ocean biome or he will become enraged (all stats tripled) and virtually impossible to defeat. Do not start using the healing potions before it is enraged. While the boss is charging, shoot towards him with Vampire Knives, while moving away from him with a Hoverboard or skybridge. This works quite well as the Hoverboard is almost as fast as the boss when charging. It is important to keep moving away while shooting when the boss is shooting bubbles or using the sharknado attack, as it spares more time for the player to heal. When enraged, the player might find it a bit harder to avoid its attacks, thus allowing the Greater Healing Potions to come in handy.

Another strategy that is very simple, is to acquire the Piranha Gun and simply kite him around on an asphalt surface, preferably around 2000 blocks long. With decent dodging, high defense and a couple of health potions in reserve, the fight is easy.

Another good strategy (one that unfortunately requires a lot of farming) involves using a skybridge with Heart Statues and Campfires along it. Will Need:

Dodge the Duke's attacks as best as possible. During the dashes before the Bubble attack, use the Death Sickle or the Paladin's Hammer. During the dashes before the sharknadoes, use the Possessed Hatchet or the Bubble Gun. When he reaches Phase 2, only use the Death Sickle or Paladin's Hammer, and dodge as best as possible. Use the Heart Statue when needed.

Another strategy requires use of the following:

Using the Razorpine, circling Fishron while constantly aiming at him will cause massive damage; this should leave him dead within around 30 seconds.

Once the player has obtained the Flairon, the battle becomes significantly easier; running at top speeds using Asphalt Blocks or Minecart Tracks while auto-reusing the Flairon deals heavy damage. 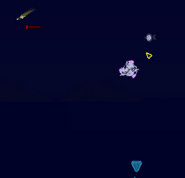 Duke Fishron chasing after the player in his Expert Mode final stage.

Terraria - Duke Fishron solo w out taking dmg from it! No buffs used.

Terraria 1.4 Journey's End - Duke Fishron's Theme Extended
His theme in 1.4
Add a photo to this gallery