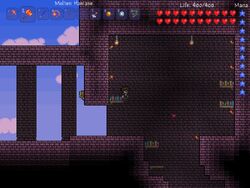 The Dungeon is an enormous structure found close to the edge of the world opposite of the Jungle, spanning many layers deep, usually all the way to The Underworld. It spawns on the opposite side of the world as the side the dungeon was on in the last world created, and on the same side as the Snow Biome. At world creation, the dungeon is randomly formed from one of three Dungeon Bricks and walls (Can come in blue, green, or pink variants). It is the home of the third boss, Skeletron, who will only spawn at night when talking to the Old Man but if attempted to enter before defeating Skeletron the player will face the Dungeon Guardian. Since the dungeon guardian can kill the player in one hit, and is extremely fast, it is highly recommended that one does not enter the dungeon before defeating Skeletron. Upon gaining access, the Clothier NPC will be freed and the player can then roam about fighting deadly enemies, dodge numerous traps, and discover powewerful loot. 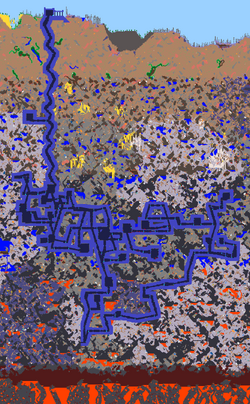 Retrieved from "https://terraria.fandom.com/wiki/Dungeon?oldid=587733"
Community content is available under CC-BY-SA unless otherwise noted.