Difference between revisions of "Empress of Light"

Desktop/Mobile-Only Content: This information applies only to the Desktop and Mobile versions of Terraria.
Empress of Light 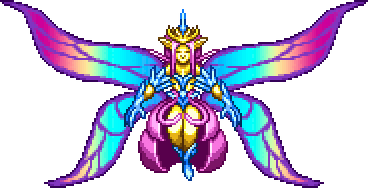 The Empress of Light is a Hardmode, post-Plantera boss fought in the Hallow. She can be summoned after Plantera is defeated by killing a Prismatic Lacewing. She is significantly more difficult than most Hardmode bosses and will typically require post-Golem gear. Fighting the Empress of Light is completely optional and is not required to progress.

The Empress of Light can be summoned by killing a Prismatic Lacewing, which is a rare Critter that spawns in the surface Hallow during the night once Plantera has been defeated in the world. As it is a rare creature, it can be detected by the Lifeform Analyzer. The Prismatic Lacewing must be killed at night to summon the boss.

Like most critters, the Prismatic Lacewing can be caught with any bug net, which can then be released, and killed, by the player manually.

If she is fought during the day, all of her attacks will deal massive amounts of damage (Like Skeletron, Skeletron Prime, and the Dungeon Guardian), effectively one-hit killing the player. She will always drop the Terraprisma if all damage dealt to her was during the day.

She will transition into her second phase once she is below half health. Her attacks will also occur within shortened intervals.

Attacks are in this particular order.

Attacks are in this particular order.