Spawns Goldfish, or Corrupt Goldfish during a Blood Moon

The Fish Statue is a functional Statue resembling the Goldfish. When Wired to a Trigger and activated, the statue will spawn Goldfish (up to three at a time). During a Blood Moon, Corrupt Goldfish will be spawned instead. During Rain, walking Goldfish will spawn. On the console version of the game the Goldfish WILL drop the Goldfish Banner, and the Goldfish (Material). There is a bug where if you use a goldfish statue during the rain, it will not hit its 3 per statue limit and instead spawn tons of goldfish. 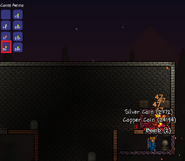 Player using the statue in a money farm.
Add a photo to this gallery
Retrieved from "https://terraria.fandom.com/wiki/Fish_Statue?oldid=605100"
Community content is available under CC-BY-SA unless otherwise noted.