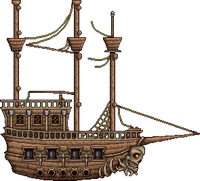 The Flying Dutchman is an enemy spawned in the Pirate Invasion. It is invincible and appears as a giant ship. Its purpose is to spawn pirate enemies. It sports cannons that shoot out explosives. The cannons can be destroyed. Once the cannons are destroyed, the ship is entirely destroyed.

Dutchman Cannons are Flying Dutchman's main weapons. Each of them have 2000 HP, making 8000 HP total. Destroying them is only way to destroy Flying Dutchman itself.

Retrieved from "https://terraria.fandom.com/wiki/Flying_Dutchman?oldid=534397"
Community content is available under CC-BY-SA unless otherwise noted.