ℹ️
100%
Giant Cursed Skulls are a Hard Mode enemy that spawn in the Dungeon. Their pre-Hardmode counterpart is the Cursed Skull, however, instead of simply circling a bit and then rushing, these skulls will periodically shoot shadow flames at the player that have the ability to go through walls, making them quite a bit more dangerous than their smaller cousins.

Giant Cursed Skulls do not appear to drop the Nazar, unlike the Cursed Skulls. This is because they do not inflict Cursed. They cannot shoot their shadow flames while under attack. 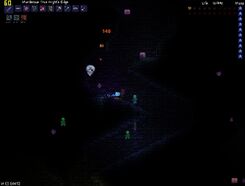 A Giant Cursed Skull zoomed in. 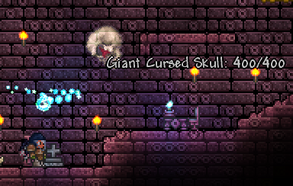 Giant Cursed Skull in dungeon
Add a photo to this gallery
Retrieved from "https://terraria.fandom.com/wiki/Giant_Cursed_Skull?oldid=552620"
Community content is available under CC-BY-SA unless otherwise noted.