The Gold Chest is a naturally-occurring item used for storage. It is identical to the standard Chest except in appearance, but it typically has a larger sum of coins inside when found initially. A pickaxe can be used to remove an empty Gold Chest that is placed, which in turn can then be picked up. It has 40 slots for storage of items, and can not be crafted or purchased. 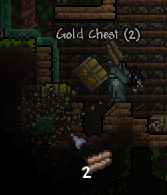 Getting some Golden Chests when placing wood near the glitched chest.

A few (Yes a few, you can create infinite golden chests this way (not sure why you would do it though)) Golden Chests "earned" from this method of glitching. 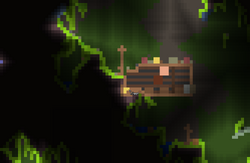 What the Glitched Golden Chest looks like on the map.
Add a photo to this gallery 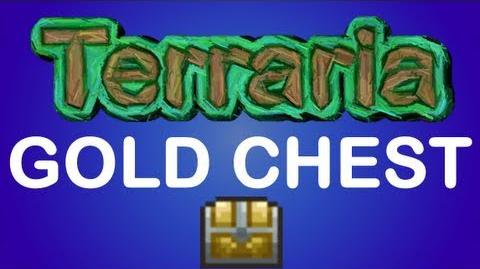 Three locked gold chests abnormally close to each other.

A Glitched Gold Chest found in an underground house standing on 1 Wood only.

Golden Chests Reflecting light from the Orb of Light

2 Glitchy golden chests, 1 is the real one

Two Golden Chests on obsidian right above the lava with one Water Chest
Add a photo to this gallery
Retrieved from "https://terraria.fandom.com/wiki/Gold_Chest?oldid=591619"
Community content is available under CC-BY-SA unless otherwise noted.