Terraria Wiki
Register
Don't have an account?
Sign In
Advertisement
in: Pages with information based on outdated versions of Terraria's source code, Jungle Temple NPCs, Boss NPCs,
and 12 more
English

"The stone-faced ritualistic idol of the lihzahrd tribe."

This article is about the post-Plantera boss. For the enemy in Granite Caves, see Granite Golem. For the rare, resilient enemy from the Snow biome, see Ice Golem. For the Hardmode enemy in the Cavern layer, see Rock Golem.

Golem is a Hardmode, post-Plantera boss found in the Jungle Temple.

While Golem is alive, the music Golem will play. When Otherworldly music is enabled, the track Boss 2 (Otherworldly) will play instead.

Golem is summoned by using the ⚷ Open / Activate key on the Lihzahrd Altar, located in the final Jungle Temple chamber, while at least one Lihzahrd Power Cell is in the player's inventory. A Lihzahrd Power Cell is contained within each of the Jungle Temple's Lihzahrd Chests, and can be dropped rarely by Lihzahrds or Flying Snakes (2% chance). Golem spawns directly above the Altar. Plantera must have already been defeated at least once in the current world in order for Golem to spawn successfully. Otherwise, nothing will happen and the power cell will not be consumed.

While Golem's main body can not normally pass through blocks, its fists, lasers, and head (when detached in the second phase) can. On the

Mobile version, if the body's path to the player is blocked, it will leap on the player, allowing it to pass through all barriers (similar to the behavior of a biome mimic).

Golem shoots ricocheting fireballs, attacks with its fists that extend from chains, and jumps around. These increase in frequency as each part takes more damage. Golem's fists can travel through blocks, but have limited range, and will also retract immediately upon being hit with any weapon. Golem jumps around more often when a fist is destroyed. This compounds when both fists are destroyed.

When the head falls below half health (8000 / 12000 / 15300), all previous attacks continue, but the eyes will begin to fire eye lasers that can travel through blocks. It fires more rapidly as it takes more damage, and the fists do not retract when hit with a weapon. Golem's head turns, which indicates who it is targeting.

When Golem's stone head has taken full damage, it detaches itself and becomes invincible, capable of passing through blocks. Its body (9000/13500/17212 health) then becomes the target. If the fists have not been destroyed, they will continue to attack the player more rapidly while the body continues to jump around. The head follows same attack pattern as before and will increase in frequency when the body is damaged. The only way to defeat Golem at this point is to completely destroy his body, which will also destroy his head, ending the fight.

Mobile version, Golem becomes "enraged" if it has to follow the player outside of the Underground Jungle, either through being lead or awoken outside of it. This causes Golem to jump around faster and, if its head is below half health, it will fire his lasers faster. However, it does not have increased damage or defense. Golem will return to its normal behavior when returned to the Underground Jungle.

Unlike Plantera, Golem's enraged behavior is not noticeable until reaching the end of its first form, when it begins jumping around and firing lasers at a faster rate. Furthermore, the difference between his enraged and normal behavior will not be noticeable to most without deliberately switching between the two. 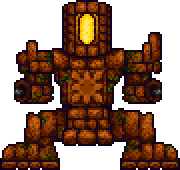 Desktop/Console/Mobile/Switch/tModLoader-Only Content: This section's information applies only to the Desktop, Console, Mobile, Switch, and tModLoader versions of Terraria.

Once Golem is defeated: