Terraria Wiki
Register
Don't have an account?
Sign In
Advertisement
in: Guides subject to revision, Guides, Pages with information based on outdated versions of Terraria's source code
English

This is a Guide page.
This means the page will walk you through a specific task, strategy, or enemy/boss fight.
Status: Subject to revision (This Guide does not meet certain quality standards and may be heavily outdated.)
This guide is about Brain of Cthulhu, which is exclusive to Crimson worlds. Player playing in Corruption worlds should check Guide:Eater of Worlds strategies instead.

"A horrible chill goes down your spine..."

The Brain of Cthulhu is a Pre-Hardmode boss. It is The Crimson counterpart of Eater of Worlds. 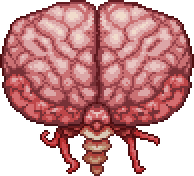 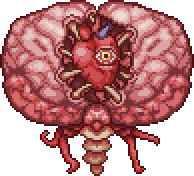 The Brain of Cthulhu can be spawned by fulfilling one of these conditions:

It must then be defeated within the Crimson: getting out of it will make it retreat and despawn.

Brain of Cthulhu has 2 phases, with the latter starting after all

Creepers have been dealt with.

The Brain cannot be attacked in this phase, only the Creepers can. The Brain will teleport to a spot in the arena, then slowly advance towards you. The Creepers will follow shortly after, and will clump up with the brain for a few seconds, before the Brain teleports again and the Creepers will follow. The idea is that the Brain will teleport behind you, which will make the Creepers fly into you, causing damage. Jump out of the way, either by using your platforms or with an extra jump, then attack the Creepers. Use piercing weapons to speed up the process. When a Creeper dies it can drop either

When all of the Creepers are dead, the Brain will split, revealing a Heart with an Eye on the inside. The Brain teleports much more frequently, often at unexpected angles, and will try to ram into you. The Brain only has 1000 / 1700 / 2167 health, so it can be killed fairly quickly. Keep using your platforms to jump out of the way. Use your strongest weapon to take down the Brain. If you have a weapon with high knockback, it will excel at dealing with the Brain, so much so that it's possible to stand in one location and attack it whenever it gets close.

The Creepers are much more aggressive. They will actively try to fly into you, even ignoring the Brain if it means an opportunity to land an extra hit or two. They can also inflict a large variety of debuffs:

During the Second Phase, the Brain will spawn clones of itself around the player. They serve as decoys, and while they cannot be attacked they can confuse the player. They start off as barely visible but as the Brain loses more health the clones will become more opaque. At low health the clones will be completely visible. The Brain will also become faster as it loses health. Life-draining debuffs such as On Fire and Frostburn, or a Hunter Potion will help distinguish them. Additionally, summoned Minions will always target the correct copy. Unlike the Lunatic Cultist clones, the Brain of Cthulhu clones do not appear on the map, making it trivial to tell which direction the real boss is coming from.

Your arena will have to be built in The Crimson, because it can only be summoned there. Since the Brain of Cthulhu spawns as soon as you smash a third Crimson Heart, you're likely to be in a very enclosed area when the fight begins. This can lead to you to being swarmed by the Creepers and get overwhelmed. This can be avoided by preparing the chasm's main chamber as an arena beforehand, and choosing which Hearts to break first:

If you have access to the Dryad, purchase several stacks of Purification Powder and completely convert the main chamber so that there is no Crimstone Block exposed to air, which prevents you from needing to deal with other Crimson-based enemies during the fight, although standard Underground enemies may spawn in their place. Set up several rows of platforms all the way across the central chamber, close enough that you can jump up to the next platform, and light up everything.

If summoned with a Bloody Spine, then the arena can simply be made in the Surface, however do not make it very tall, as jumping too far above it will be considered exiting the Crimson, causing the Brain of Cthulhu to despawn. If you have already prepared the central chamber as an arena for a prior fight, use the Bloody Spine there to avoid a despawn.

The Brain Of Cthulhu is unique in the way it reacts when you die. Unlike every other boss, The Brain Of Cthulhu does not despawn upon your death, rather it keeps ramming into the spot you died. You can use this to your advantage by using Purification Powder to clear out a small area to make a basic house. Then if you place a bed inside, you have a respawn point in the main chamber. Now, there is virtually no consequence to dying in the fight, as you can keep respawning and continue the battle.

It is recommended to have at least 200 Life and 100 Mana, which requires 5

Mana Crystals: if you've done some spelunking you're bound to have come across this many.

Platinum armor is recommended if you are willing to mine enough of their respective ores. You can get

Crimson armor by killing enough Creepers without necessarily defeating the Brain itself.

Tungsten armor are slightly riskier, but ultimately also viable options, especially if you are confident in your dodging abilities.

It is possible to kill the Brain of Cthulhu with just

Lead armor, but the fight will be a bit more dangerous.

Pumpkin armor is another viable option, rewarding slightly less defense than Iron / Lead, but increasing your damage output, which can ensure the fight is completed quickly.

Wizard Set is the best offensive mage set available, but has little defense. The

Flinx Fur Coat is the only armor that can boost summon damage at this stage of the game.

Rocket Boots or its upgrades are recommended as they can help with dodging.

Accessories with Menacing or Warding modifiers will be most efficient here if you have them, but are not required.

Bones drop from Skeletons, so

Necro armor can be used here.