From Terraria Wiki
Jump to: navigation, search
This guide is about Eater of Worlds, which is exclusive to Corruption-exclusive worlds. Players playing in Crimson worlds should check Guide:Brain of Cthulhu strategies instead.
Eater of Worlds

"Screams echo around you..."

The Eater of Worlds (or EoW) is one of the bosses in Terraria. It is found in The Corruption. Preparation for this boss is both extremely helpful in the fight, and is relatively simple to complete. The following are some hints, tips, and strategies to help you defeat it when first encountered.

Eater of Worlds is spawned by fulfilling one of these conditions:

You must then defeat Eater of Worlds within the Corruption: getting out of it will make it retreat and despawn.

Eater of Worlds is a huge multi-segmented worm, and thus, its parts tend to linger for a while. You can damage those parts with penetrating weapons and ammos to deal a lot of damage. It is also very mobile if you decide to fight in Corruption chasm. Thus, it's important to reach the surface (and its arena if you made it, check below for more info).

Beware that, when a segment dies, the segments in front and behind will detach and separately attack the player.

These two worms form a new head and tail, and they will make the fight more difficult. To prevent that, you can try to prioritize the Head segment, which has the lowest defense of the segments, but it is also the most damaging one. Alternatively, you can prioritize the Tail segment, which however is the opposite (more Defense, less damaging).

Careful management of segments can reduce the number of smaller, harder to hit worms. In this case, prioritize the use of non-penetrating weapons, and hit its head and tail. If you destroy a middle segment, concentrate on the smaller worm, since the larger one can be easy to predict and dodge.

In Expert Mode, the Eater of Worlds gains a variety of upgrades:

Vile Spit is the Eater of Worlds' most dangerous attack, so it is important to bring sufficient mobility accessories and make an arena that enables you to dodge. Due to the nature of the attack, the player will likely have the Weak debuff for most of the fight. This makes melee a less viable option, due to the decrease in movement speed, melee damage and melee attack speed. 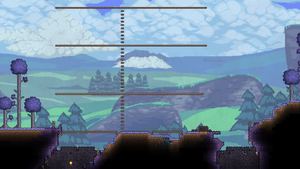 Multiple platforms made for the Eater of Worlds fight.

The player must be in The Corruption to summon the Eater of Worlds; moving too far away from the biome during the battle will cause it to flee.

The Eater of Worlds is a very large Worm enemy, so dodging it may prove to be difficult. You may want to try fighting it on the surface instead of underground. If summoning this boss via breaking shadow orbs, be sure to provide yourself a quick and safe escape back to the surface where your arena will be. A room with a

Bed next to your arena can let you teleport there easily, but be careful that the path from orb to arena does not go through any non-Corrupted areas (lest the boss despawn). When making your arena on the surface, you have some options:

If you don't want to fight it on the surface, it's alright to fight it underground instead. If you are breaking

Shadow Orbs, hollowing out an entire arena every third orb or escaping to a surface arena may not be practical; you should modify the terrain around you to have a quick path of escape to a space with good horizontal clearance and any hazardous terrain smoothed out or boarded over. Consider placing platforms periodically to provide extra maneuverability.

If you have an Autoswing weapon such as the

Falcon Blade or a

, you can use a Grappling Hook and hook it to the ground to be able to remain stationary. Alternatively, a

Cobalt Shield or an

Obsidian Shield can be used to become immune to Knockback. If you happen to have any

Shadow armor, it could be useful, as it increases your melee speed. Once the Eater of Worlds has been summoned, begin swinging. As the Eater of Worlds tries to inflict damage by passing through you, the Autoswing weapon will destroy its sections fast and effectively, and the fight will be over fairly quickly. This can also be used as an effective farming technique.

It is recommended to have at least 200 Life and 100 Mana, which requires 5 Life and 4 Mana Crystals: if you've done some spelunking you're bound to have come across this many.

Platinum armor is recommended. You can get

Shadow armor by killing enough segments of the boss without necessarily defeating it, or

Ancient Shadow armor by farming the Eaters of Souls.

It is possible to kill the Eater of Worlds with just

Lead armor, but the fight will be a bit more dangerous.

Pumpkin armor is another viable option, rewarding slightly less defense than iron, but increasing your damage output, which can ensure the fight is completed quickly.

Wizard set is the best offensive mage set available, but has little defense. The

Rocket Boots or its upgrades are recommended as they can help with dodging.

Accessories with Menacing or Warding will be most efficient here, but are not required.

Summoners should use the Flinx Fur Coat

Bones drop from Skeletons, so

Necro armor can be used here.

Shadow Scales that it drops. With endgame, or even late pre-Hardmode, armor and weapons you can quickly defeat this easy-to-summon boss. Once you have recruited the Tavernkeep, his Lightning Aura sentries are deadly against the EoW, because once the head has passed a given point, all the body segments must follow. Even the Rod can kill the boss "cleanly" (from the head back) in a few passes, while the player simply evades the worm and renews or moves the sentry as needed.

Hardmode weapons that swing continuously such as the

Excalibur are extremely effective against the Eater of Worlds. Spears and higher tier Flails can also quickly dispose of the EoW. Simply grapple yourself to the ground (or use a

Cobalt Shield) and keep attacking/keep your flail below you by holding ⚒ Use / Attack. If you have Molten Armor, you will be able to take any damage the Eater of Worlds dishes out, as its killed segments tend to drop Hearts, which will heal you.

(easily obtained with a statue farm) offers a fairly quick execution, because it hits every segment in line-of-sight. With an arena high enough for the EoW to emerge completely from the ground, plus a modest damage bonus (+15% or better), it can destroy the entire boss in three strikes. However, this is much less practical in Expert mode, due to the Vile Spit projectiles. One strategy is to get the slime mount and bounce up and down repeatedly inside the chasms.