Difference between revisions of "Guide:Eye of Cthulhu strategies" 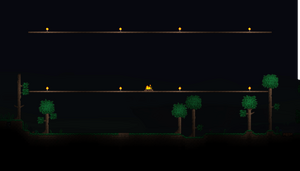 The best armor to have at this point would be

Platinum armor, although they can be difficult to obtain. Consider using these sets if you are having trouble beating the boss with weaker armors.

A full set of

Tungsten Armor is easier to get at this point, and it is a good choice for this fight. While it may seem tempting to mix this with pieces of stronger armor (Gold or Platinum), doing so is unwise, as the Silver Armor or Tungsten Armor's set bonus provides more defense than mismatched armor. On the 3DS

Mobile versions, if you have taken out

Ninja Armor will be especially useful. While it provides less defense than Silver or Tungsten, it enhances the combat potential of throwing items, which are extremely effective against the boss.

Lead Armor sets can be used, but caution must be taken, especially in the second phase, and should only be used if you are a good dodger.

A Summoner's options are limited at this point of the game. Because there are only 3 (

) summon weapons available pre-hardmode, summoners have a very tight selection available, made worse because many of these weapons are extremely difficult to obtain at the point you have to fight the Eye. For first-time or unskilled players on the

Old-gen console version, it's better to completely avoid focusing on the Summoner class until later in the game.

Cloud in a Bottle.

This strategy can be reused for the