The Dungeon Key Molds can provide the player with some of the game's most powerful weapons. As such it can be very convenient to obtain them in a relatively quick manner. This article attempts to list methods of doing so.

Events (aka invasions) are an excellent way to farm key molds. They provide large numbers of monsters as well as coins and interesting drops on their own. As some events occur by random and others by using items, players who doesn't feel like waiting should gather items for the latter type. Events may also be chosen out of their drops. Below is an overview of events: 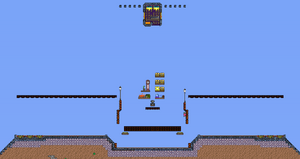 Example of an arena which can be used to fight invasions and thus farm key molds. Notice the layer of Pearlstone Blocks below it.

Defeating events may additionally require various setups to make the fights easier, largely depending on the event you choose. Pirates and Goblins require next to nothing, while the Pumpkin and Frost Moon usually need elaborate arenas.

IMPORTANT: When you see a mold drop, be sure to pick it up right away! Only a certain number of dropped items can be present at the same time, meaning the mold will despawn if enough items are dropped after it.[1]

The time it may take for Key Molds to drop makes AFK farming an option some players may consider. There are three things that can kill monsters without player interaction: minions, lava, and traps. The two latter are often used to make arenas for defeating events, meaning an arena can be convenient for AFK farming. In fact, if the arena is good enough it's even possible to use events for AFK farming. Without player supervision the character should however be walled up as protection. The "waiting room" should be some height above the ground to avoid enemies that can pass through blocks (Wraiths, Devourers), and protected by traps to prevent flying enemies from piling up. The event should also not feature flying enemies that can pass/attack through walls, such as Elf Copters.

If the player doesn't have or care to make an arena, it's alternately possible to just use minions. This approach largely requires the player to use minion-empowering items (list). As minions are able to pass through walls when returning to the player, but unable to when attacking an enemy, no "waiting room" should be constructed.

Keep in mind that even while AFK-farming, the player is still required to check the progress once in a while. Otherwise any dropped key molds will disappear due to the aforementioned note.

A piece of land transformed into the Hallow for mold farming. The surrounding shaft prevents the Hallow from spreading to the adjacent land. Notice the platforms which allows monsters that spawn in or fall into the shaft to climb up.

If you want to artificially build a biome to farm Key Molds in, there are two ways to do so:

Another, lesser, method is to kill worm type creature like the World Feeder with explosives. This will kill multiple segments at once, each dropping their own loot.

The Brain of Cthulhu uses a group of creatures called Creepers to attack the player. Each Creeper has a 1/2500 chance to drop the Crimson Key Mold. Spam summoning the Brain of Cthulhu is not as reliable and fast as the corruption equivalent, but still convenient.

Prior to patch 1.2.3 it was popular to use Meteor Heads to farm key molds. Being summonable with enough Meteorite, easy to defeat, and posing hardly any danger to the player, Meteor Heads were as made for this purpose. In 1.2.3 they were however changed to not drop any loot once in Hardmode, removing them as a means of farming.