Farming is the practice of intentionally obtaining useful resources in a convenient area.

Most resources can be found naturally within the world, while others such as several Plants or Crystal Shards can additionally be grown in a convenient area for harvest.

The following guide will focus on those resources that can be easily obtained or farmed in large quantities.

In Terraria, an item or block is considered "renewable" if it can be created indefinitely within a single world. 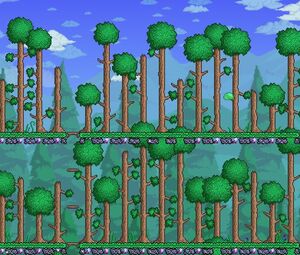 While trees grown by a player are significantly shorter than those generated naturally, building a farm for them provides a very simple way to obtain all different Wood types in one place.

A typical Wood farm consists of a flat surface made with the block required to grow the respective tree. If building multiple layers, all layers will need to have the correct vertical spacing in order for the Trees to grow properly.

In order to grow into a Tree, Acorns require sufficient space both horizontally and vertically.

In addition to farming Gems via Gem trees it's also possible to obtain them via mining or by using the Extractinator on Silt, Slush and Desert Fossils. In contrast to trees however, these alternatives are finite. Geodes

, however, are not finite, and can be farmed infinitely through Granite Cave enemies. For more detailed instructions on Gem tree farming, see this Guide.

Cacti, Bamboo, and Giant Glowing Mushrooms cannot be manually planted, but they will automatically grow on their respective surfaces if all conditions are met. Rich Mahogany Trees will grow automatically as well, but can be planted with Acorns on Jungle Grass. If you wish to farm Bamboo, you cannot make it indoors, as Bamboo will not grow in front of walls of any kind--even naturally generated ones. It also recommended to acquire Water-Walking Boots or better for farming purposes, and to make the farm quite long, as Bamboo takes forever to grow. At least ten blocks of vertical space is recommended.

A well planned herb garden will provide materials needed to create almost every buff Potion -- while many potions have other ingredients, they all need at least one herb.

Herbs can be planted in soil, Clay Pots or Planter Boxes:

The Staff of Regrowth will greatly increase the amount of herbs and seeds harvested. It will also work on fully grown but not yet bloomed plants at a lower efficiency, making it very useful when harvesting natural Deathweed or Waterleaf. Note that the Staff of Regrowth requires herbs in Planter Boxes be in bloom, not just mature. Regular pickaxes can still harvest mature (and not blooming) plants, but they will not drop seeds as usual.

All Mushroom types will grow naturally on their respective Grass surface. Usually, mushroom farms consist of several layers of dirt with 3 block tall gaps in between.

Note that vines will grow down from strips of grassy dirt, preventing the growth of other layers below them. A layer of Wooden platforms below the dirt layers will prevent their growth while allowing the player to walk through them, allowing layers to be packed more tightly.

Regular Mushrooms are only used for Lesser Healing and Regeneration Potions, however their sell price is significantly higher than the other two, giving it the small use of a limited money farm as well.

Vile or Vicious Mushroom farms are used for Vile Powder, which is required to summon the Eater of Worlds or Brain of Cthulhu, depending on the natural evil biome. Make sure to contain the farm properly, otherwise the Corruption/Crimson may spread out of the farm. A good idea is to build these farms in the sky, where there is no chance of spread occurring.

Glowing Mushrooms are much more useful in comparison, being used for Furniture, and Shroomite Bars in Hardmode. They also grow at a faster rate than usual, and Giant Glowing Mushrooms may grow if given enough space (See above).

Mushrooms can be automatically harvested with Dart Traps or Actuators. (The following does not apply to PC v1.4) Glowing Mushrooms have the unique ability to grow on actuated Mushroom Grass; they will be immediately harvested as soon as they spawn, having their usual chance to drop as an item and/or seeds. This can be taken advantage of by building a large mushroom farm in the surface layer and letting it produce and harvest Glowing Mushrooms without player intervention. Note that such a farm may crowd the limit for loose items (which is 400), causing other loose items to despawn unexpectedly. (In Vanilla, there is no way to automatically place them into chests.) Conveyor belts can at least gather the crop into stacks. 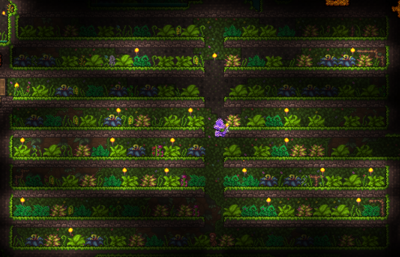 A player standing in a jungle bait farm.

A bait farm is used to gather large amounts of bait before Fishing, by spawning many Critters, some of which will be suitable. With a Water Candle and/or Battle Potion, spawning in general can be increased, including natural spawning of Critters. If any Golden critters (of bait types) appear, they will have the maximum bait power, but even so, these are probably better sold than used for fishing.

Fireflies are one of the most common forms of Bait, though not very powerful. Widely varying numbers of them will spawn at night on a full moon, especially near NPCs. Butterflies will similarly spawn during the day; their bait power varies widely by type, from the almost useless Monarch to the top-tier Tree Nymph.

Worms are common and of moderate power. They spawn commonly during a Rain, and can also be produced when destroying stone or dirt piles, or cutting grass. They can also be crafted into the considerably more powerful Enchanted Nightcrawlers.

Jungle grass is an excellent and reliable source of bait, as each Jungle plant has a very high chance of spawning 1-3 bait critters in any combination of the following: Grubby (weak), Sluggy (equal to worms), or Buggy (second only to the top tier at 40% Bait Power). Use of Actuators on Jungle Grass blocks will not spawn any Jungle bait; in order for any plant to spawn Critters, that plant must be destroyed directly by the player. However, indoor farms are still possible, as Jungle plants will grow in front of walls and fences. Vines will stop plants from growing when long enough; so, in order to make the farm higher efficiency, a row of blocks should be placed under the Jungle Grass blocks to prevent vines from growing. The figure above is a shining example of a well designed bait farm.

Once in Hardmode, Lightning Bugs will appear in the Hallow, which are considerably more effective than the fireflies they resemble. However, these are much less effective than the Jungle baits--both in Fishing Power and attainability (once a farm is attained).

Flower Boots no longer produce Critters when flowers are destroyed as of update 1.4 (In previous versions you were able to combine the use of a flare - placed at the player's feet and the aforementioned flower boots to spawn critters endlessly).

Since bait can be easily obtained from common Critters and simple farms, fishing is by extension another source of resources. Common resources from fishing include (but are not limited to):

The items obtained will vary depending on the biome and depth in which the player is fishing.

Small ponds for fishing can be either found naturally or made artificially by duplicating liquids (see below).

Prior to 1.4.0.1, liquids could be easily duplicated in large quantities (see images). This process could be easily automated with Pumps. By extension, blocks that can be obtained by mixing liquids, are renewable as well: Obsidian, Honey Block, and Crispy Honey. In 1.4.0.1, it is still possible to create infinite amounts of any liquid, water through the Bottomless Water Bucket, lava through the Bottomless Lava Bucket, and all three through the use of Liquid Bombs and Liquid Rockets. However, these are not as fast as previous methods, and require much more resources.

Crystal Shards have a high sell value for a common material, so farming them can be an easy way of making money throughout Hardmode without direct player action. A full stack is worth 15984. Crafting them into Greater Healing Potions yields even higher profits, especially with an Alchemy Table.

For farming, place single horizontal rows of Pearlstone, separated by three tile-wide gaps for walking and harvesting. The farm must be in the Cavern layer or below. If the farm is not built in the Hallow, it should be sealed in a frame of non-infectable blocks with a three-block gap outside to prevent the Hallow from spreading. Note that there are some limits to how densely crystals can spawn, so farms need to be fairly large to be worthwhile. It will also take up tens of harvests to offset the initial building cost (if using actuators and wires), so they should be built for long-term profits.

Actuators can be used to switch Pearlstone to an inactive state, causing all Crystal Shards to drop for easy harvesting. For even greater convenience, Conveyor Belts can be used to move all dropped Crystals for easier collection.

Some items may be renewable in a new world, but they become non renewable as the game progresses:

While these resources have a technical limit and cannot be grown naturally, the abundance of these in a world makes them very easy to obtain in very large amounts. 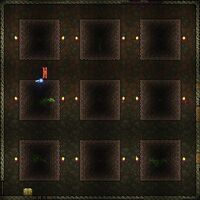 An example of a Chlorophyte farm.

Tiles of Chlorophyte ore can spread to nearby Mud Blocks, allowing farming. On the

Chlorophyte will only naturally appear in Hardmode Underground Jungles, but the ore can be grown in any non-evil biome underground. Farming in the Cavern layer will be most productive; in the Underground layer its spread is much more limited. Make sure to protect the area from the spread of the Corruption and Crimson, as both will convert mud into dirt, preventing Chlorophyte from growing.

Chlorophyte has a spreading limit, checking a square area roughly centered around the ore tile selected to update. The exact limits will depend on the platform:

Multiple farms built too close to each other will compete with each other (that is, they will share the limits above). Similarly, larger squares will produce no more chlorophyte than the minimum sizes, and may be more difficult to mine. However, a slightly larger square might spread faster once most of the square has been converted, as it will have more candidate tiles to convert. Note that any Chlorophyte Ore present within these ranges will count toward the spreading limit, and may similarly compete with the farms.

Using larger squares will not interfere with farming, but may be more difficult to mine, and in any case the amount of Chlorophyte produced will not exceed the limits above.

A few items are generated in particular locations, and cannot otherwise be crafted or spawned. Unlike much of the above list, these items can be feasibly permanently eliminated from a single world. This includes furnishings and materials from several fixed structures, notably the Dungeon, the Jungle Temple and the Underworld's Ruined Houses, and Chests and special items obtained from them. For a fuller listing, see Non-renewable items.