Terraria Wiki
Register
Don't have an account?
Sign In
Advertisement
in: Pages with information based on outdated versions of Terraria's source code, Guides subject to revision, Guides
English

"The stone-faced ritualistic idol of the lihzahrdian tribe..."

Golem is a Hardmode boss, found at the end of the Lihzahrd Temple. It has high HP, high defense, and multiple limbs and phases, however it is easy to defeat as it is not very mobile and its attacks are easy to dodge. 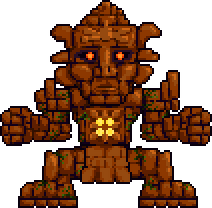 Golem can be summoned by using the

Lihzahrd Power Cell at the

Golem has a total of four attackable targets, but only two are necessary to defeat:

Once summoned, Golem will move around while slowly attacking with its fists. The head will continuously spit two fireballs that will bounce around the arena. Dodging the fireballs is your priority, as they will inflict On Fire! and prevent health regeneration. The head (16000/24000/30600 HP) and arms are the targets during this phase, with the head being the main target. Destroying the arms is not strictly necessary, but recommended to make the next phase much easier. Note that Lihzahrd enemies can still spawn in the arena.

When Golem's head HP reaches 50% (8000 / 12000 HP), it will begin using Eye lasers. They start at an average interval, but as the head's HP is reduced, the frequency of the lasers will increase. When the head's hit points reach zero the second form begins. The lasers signal a DPS race and all focus should be concentrated on getting through each laser phase. These eye lasers can pass through blocks.

Destroying the head stops the laser assault and reveals Golem's true form. The body (9000/13500/17212 HP) is the main target and destroying it will end the fight. The body will jump around and if the arms still exist, they will punch devastatingly faster compared to phase one. The head will be attacking while flying around. Note that the Head can pass through blocks.

When the body has 50% health (4500 / 6750 HP) left, the head will begin firing lasers again. Like the first form, the laser frequency will increase as the body's hit points decrease.

If this is your first encounter with Golem, then you will not possess the

Picksaw capable of shaping the

Lihzahrd Temple's blocks, so your customization is limited, unless you use

For safety reasons, you should use a Pickaxe or Wire Cutter and remove/disarm all of the traps, as these can be hazardous in the fight.

All classes can fare well against Golem.

Mobility is important due to the multiple ways damage is being dealt in the fight. Wings are extremely important and can be supported by accessories like Soaring Insignia or Shiny Red Balloon and its equivalents. Wings may be dropped if one can jump multiple times, one would, however, need to equip more accessories. With equipping wings, players can also omit the Rocket Boots and its advancements, since running would mean hitting Golem and to fly over is a much safer alternative. If using wings, the Hoverboard is an excellent choice due to its ability to speed under Golem during its jumps and over its head during the first phases. Shield of Cthulhu, Tabi and Master Ninja Gear would suffice. However, players may get into trouble if they dashed into Golem with Shield of Cthulhu.

Charm of Myths is recommended since there is a lot of damage being passed around without a wall, so multiple potions may be necessary. The natural regeneration will also allow you to take advantage of easier phases of the fights. Alternatively, you can switch to Charm of Myths only when drinking health potions, and use another accessory for the rest of the battle. Star Veil and/or Obsidian Shield may also be useful to negate the chance of being clipped by multiple projectiles.

Avenger Emblem and other damage increasing emblems/accessories are very useful for quickly ending the 'hard' phases of the fight given the longer they last the bigger room for error. Magic Cuffs and Mana Flower can be useful for magic characters.

Grab all of the spike ball traps and wire from the temple as you pass through it, then when you get to the chamber at the end follow these instructions. Feel free to build a short wall in the entryway to the Golem's summoning chamber to block off the temple's monster spawns from interrupting your fight. Build a vertical wall halfway through the room with three holes in it big enough for you to pass through (3 blocks high). Then build a horizontal walking path on the half of the room opposite from the half Golem's altar is on (as in, not on that side of the room) (One of your vertical wall holes should be level with your walking path, the other should be where your wall meets the ceiling, and the last should be where your wall meets the floor). Make sure there is one hole in it big enough for you to pass through (2 blocks wide) and also make sure you have a small pool space for honey (1 block high, 2 blocks wide). On the side of the room with the altar, build a ceiling using any block type straight across (make sure that your ceiling only covers the open space and not any nooks or crannies). Below the ceiling install as many spike ball traps as will fit, and then hook them up to a pressure plate which you will locate anywhere on your walkway for your convenience. Place a campfire and a heart lantern anywhere that makes sense, and be sure you've got the best armor you can get your hands on, plus as many speed increasing modifiers and at least the Lightning boots. Summon the Golem, then spend the first few minutes of the fight standing in the lower corner (away from the Golem) slashing/shooting/casting magic at the fist that can cross the room to punch you until it breaks. Then hop/fly onto your walkway and proceed to rain deadly spike balls upon the Golem. Focus on hitting your pressure plate as often as you can, while dodging the Golem's laser eyes (Phase 2) as best as you can by flying around your little corner of the room and dunking yourself in your honey pool as often as you can. When Golem's head detaches (Phase 3) be sure to hop over your ceiling hole to make it follow you there, then when you jump back to your walkway it should just hover overhead (instead of right next to you). Continue dodging, dunking, and stomping on your pressure plate until Golem is defeated. This works very effectively when trying to farm for the Picksaw or for money with above tier armor.

Make a vertical wall, but put a 3 block gap at the bottom and top so you can get in and out. Also build a horizontal line (with blocks, not platforms) with a 3 block gap somewhere along with it. The horizontal line should stop at the vertical line. When Golem spawns, he should jump up on the horizontal platform, but not go back down. This allows you to hit him continuously (Death Sickle highly approved), without taking too many potions (max 2-3). This also allows you to kill him fast. Also, someone on top of the vertical line shooting on Golem is very helpful. This strategy does not seem to work on console.

With a static hook, the player can grapple onto a wall of the arena and move side to side to dodge most of Golem's projectiles. Firing an Onyx Blaster with Chlorophyte bullets can rip through the boss and keep the fists at bay.

The Bunny Cannon works well against Golem: set it up in an area Golem cannot reach (if the blocks are set just right, Golem will not be able to chase you), and fire away. Calculate Golem’s health and divide it by the bunny cannon’s damage (350), and that should give an approximate number of explosive bunnies to use.

Place two target dummies next to one another, and then placing some blocks 5 tiles above the top tile of the dummy. Next get the slime mount and activate it in front of the dummies, then just jump. You’ll notice that your character is going to bounce rapidly up and down, and will also have immunity due to the slime mount. If this is paired with summons it can result in the player taking no damage at all during the fight. It is not recommended to use any actual weapons if you are building this above golem as weapons could interrupt the dummies and break the immunity. This can lead to the golem taking priority damage over the dummies and result in you taking damage.

For this method, place 2 Teleporters on opposite ends of Golem's chamber and wire them together. Make sure to have some sort of device such as levers or Pressure Plates to activate them. Summon Golem and teleport rapidly, Golem will have trouble hitting you if you teleport fast enough. This is an effective manner of beating Golem quickly as it nullifies the damage that he can deal, however this method becomes less effective as Golem takes more damage since he fires his lasers more frequently.

3DS-Only Content: This section's information applies only to the 3DS version of Terraria.

Excavate an area that allows running and jumping around, and add 3 to 5 layers of platforms. If needed, also add Honey pools, Heart Lanterns, Heart Statues and Campfires.

Spawn Golem while standing on the platforms. Aim and stun his head, but when he punches you, you can stun his arms. In the second form, his head can shoot lasers rapidly and cannot be stunned, so just use a high damage weapon, like a Terra Blade or a Paladin's Hammer to destroy his body. The Frost armor will make the fight a lot faster, allowing Golem to be defeated in less than 2 minutes. For a video tutorial, see Merrick's Terraria Mobile: Heart Arrows VS Golem Video.