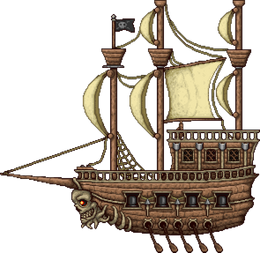 The Pirate Invasion is an event where numerous pirates invade the spawn point. It can occur in Hardmode randomly or by using a

Do not attempt to fight the Pirate Invasion in an open space during early Hardmode. The amount of enemies coupled with their abundant projectiles will quickly overwhelm an inexperienced or underequipped player. Instead, consider some simple preparation. With a secure, enclosed space, the event can be made easy. Simply construct a box-shaped building on or off the ground. When inside the box, no enemies will be able to reach the player. Attacking enemies will require weapons that can attack around or through blocks. If the player does not possess such weapons, their only option will be to place holes in the walls and fire projectiles through them, taking care not to be hit by enemy projectiles. It is best to place these holes in ceilings or floors to make it harder for ground enemies to fire into them. The Flying Dutchman cannot pass through blocks, so it will remain stuck against the walls of the box where the player can easily destroy its cannons. Do note that the Pirate's Curses, with trap immunity and the ability to fly through blocks, will be a large threat to those in shelter. It can help to make the shelter larger for space to dodge and fight the Curse.