Terraria Wiki
Register
Don't have an account?
Sign In
Advertisement
in: Guides subject to revision, Guides, Pages with information based on outdated versions of Terraria's source code

The Pumpkin Moon is a post-Plantera Hardmode event triggered by activating the Pumpkin Moon Medallion. The event is very rewarding if you can successfully keep pace, providing a large amounts of money and good weapons by the end of the night.

However, the event is also difficult and requires a lot of preparation. 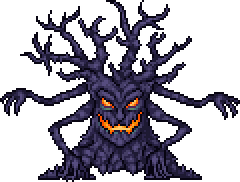 The event consists of 14 waves, with a final Wave 15 which will last until the end of the night. As the event goes on, stronger enemies and unique bosses will appear.

During the first few Waves, a large number of

Splinterlings will appear. These enemies only have average stats, so a weapon with good crowd control abilities will clear the first waves fairly fast.

The first miniboss, the Mourning Wood will start appearing on Wave 4. This enemy will walk towards the player, and then shoot Flaming Wood when it stops moving. It can also leave Greek Fire on the ground. While it can prove to be rather easy to kill, on later waves many of them will spawn, so one can easily get overwhelmed by their projectiles.

Headless Horsemen will start appearing. These are weaker than the Boss enemies, but much stronger than the average ones. Even if they are not a threat by themselves, they can be very dangerous combined with the minibosses.

On Wave 7, the main Boss of the Event will appear, the Pumpking. It behaves similarly to Skeletron; attempting to stay above the player and attacking with the blades on its arms. The most dangerous attack it has are its Flame Scythes: a large, highly damaging projectile that speeds up over time, similar to Demon Scythes. It's rather slow for a boss enemy, so it can be easily outran and dodged by moving in wide circles.

The further the player has progressed, the more boss enemies will be able to spawn at once, and their chance to drop an item will also increase. On the Final Wave, up to seven of each boss can appear, and they will always drop an item and their respective trophy.

The Pumpkin and Frost Moons are much easier to handle with the proper arena.

A flat surface about 168 blocks wide (See NPC spawning) will focus all spawns on the arena. Above it there should be a long platform of the same width, high above the ground in order to keep grounded enemies out of reach.

Since the player will mostly focus on the Bosses on the later waves, Lava pit and Traps may be helpful to take out the weaker enemies more easily. However, on higher difficulties the Traps' low damage is practically useless against the higher-health enemies, making them almost a liability due to the invincibility frames they provide and the risk of being hit by them and taking massive damage in the process.

It's also a good idea to make a room with a

Bed near the Arena, so in case of death you can quickly get back to it.

The event can be summoned at any time post-Plantera, but it is usually done after Golem and Duke Fishron have been defeated, and before the Frost Moon.

Accessories should be modified to Lucky or Menacing for the event.

The use of mounts can save accessory slots that would've been used for mobility.