"The cursed guardian of the dungeon..."

Skeletron is a Pre-Hardmode Boss protecting the Dungeon. It's big, tough, hard to dodge, and can seriously ruin your evening many times over. Like any other daunting task in Terraria, defeating it is largely about smart preparation. Following are some hints, tips, and strategies to help you do so.

Skeletron can be spawned by fulfilling one of these conditions:

It must then be defeated before all the involved players die.

Skeletron is a large skeleton, composed of a Skull and 2 Arms. In order to defeat it, you must kill the Skull.

It attacks the player mostly by swiping its hands. This attack is quite easy to predict, as it prepares them by lunging them backward, so you can prepare to dodge them. However, the main issue is their erratic trajectory. You can dodge them by either jumping or running around. It can use both hands to have different timings and trajectories, so you might get caught off-guard by trying to dodge its other hand.

Timing is key in order to defend from the hands: after dodging them, use your piercing weapons to deal damage to both arms (and Skeletron's skull, if it happens to align with them). The arms don't have much health, so they can be detached fairly easily.

After some time, Skeletron will use its signature spinning attack. It's slow, but constantly homes towards you. During this attack, which lasts for quite a bit, it is the most vulnerable; it increases the power of the attack but loses all its defense. As such, use the fastest weapon at your disposal to deal a lot of damage. However, make sure to constantly move; if you get hit by it, you take a lot of damage and you get

During the spin attack, the hands will stay fixed in a uphanded position while Skeletron moves. You can also use this time to deal damage to them, but keep in mind that their defense isn't reduced.

Failing to defeat it before daybreak will make Skeletron permanently spin at you, just like

Dungeon Guardian; it will gain extreme amounts of damage and defense, one-shotting most players while only taking 1 or 2 damage from all attacks.

Skeletron's head has 60 defense until one of its hands go down. This means that almost every weapon at that point will not do more than 1 damage without a critical hit. As such, you're forced to detach the arms from it in order to progress. Moreover, the hands can

slow you, and its spin attack is much faster than in Normal Mode. After one of the arms goes down, Skeletron gains the ability to shoot skulls with a small homing effect when it's not spinning. The frequency of this attack increases as its health goes down and when the other arm falls.

At the beginning of the fight, the arms must be prioritized first, as the Head will barely take any damage with its massive defense. Their attacks have a 50% chance to briefly apply the Slow debuff, which can greatly slow down a player, even if just for a second.

It is recommended to kill both hands at the same time, to minimize the amount of time Skeletron spends attacking with homing skulls alongside its remaining hand.

Because of the player's lack of knockback immunity, getting hit by the spin attack can result on a death even at full health due to its massive damage and speed, so the player needs high mobility to avoid it at all costs.

Blue Horseshoe Balloon or its equivalents together with Lightning Boots can provide that mobility, together with the Shield of Cthulhu, or a Featherfall Potion.

It's easier to dodge the skulls of the second stage while Skeletron remains above the player, since they can be dodged like Queen Bee's stingers with a little curve. However, this could make the spin attack connect more easily if the player isn't careful, as the head will stand closer to them. The most effective way to dodge the skull attacks while remaining under the head of Skeletron is to run/dash left and right in quick and alternating succession.

While Skeletron is spinning, running in a straight line with your Boots isn't recommended: it starts firing the skulls as soon as the attack is completed, so the player will most likely get hit by one of them. Because of this, moving in circles using the hover effect and/or double jumps is much safer. Featherfall potions will allow you to stay in the air for much longer, making the circling much easier. If you do have a straight line prepared and you can take a few hits, it is very easy to inflict a lot of damage with a medium-ranged weapon like a yoyo with a string boost or a bow, as you can land many shots in succession without needing to aim.

The entrance to the Dungeon can be easily adapted into an arena.

Warning: Don't make significant edits to the dungeon floor. Doing so can stop the Endgame Cultists from spawning, potentially blocking progression. Plan your arena above the Dungeon roof instead.

The entrance area to most dungeons can often be modified into a more desirable arena if needed. Most important is that you have room to dodge the hands, as well as enough vertical space to avoid getting trapped when Skeletron's head begins to spin.

It's recommended not to try to fight Skeletron without at least 300 Health,(15 hearts) however on Expert mode 400 health is almost mandatory.

The best armor available before the fight is Shadow or Crimson armors, because of their high defense, great speed with the former or better regeneration with the latter. Molten Armor is available if the player chose to mine Hellstone before entering the Dungeon.

Rangers on the 3DS

version may want to use Necro armor, since skeletons drop bones.

Magic users, however, should use the Wizard set due to its massive offensive stats, surpassing both Jungle and Meteor armor. Summoners can use the Bee armor, or

and focus on whips.

Minecart for the extra speed and build a large, diamond-shaped

Minecart Track, such as one having in the middle on each side three Minecart Tracks with a Bumper on the outer end, and the inner end connects using a switch track to two diagonal tracks, with both connected and the preferred direction up on one side and down on the other, and with a total width of roughly 90-100 blocks. After the Skeletron battle begins, mount the Minecart and accelerate to maximum Minecart speed. While collisions can occasionally occur, they should be uncommon enough that healing will not be a problem. Using attacks at range is highly preferred, though unlike a Hoik system, a Minecart might not move fast enough to allow a boomerang to do all of the work as in some Dungeon Guardian strategies. If using pre-Hardmode weapons, the Molten Fury with Frostburn Arrows is highly recommended.

If using the Minecart strategy and for whatever reason the battle lasts until dawn, the Dungeon Guardian A.I. will actually cause the Skeletron head to follow you at such a slow and steady pace that it should never catch up. In such a case, however, you will take fatal damage from contact and deal 1 damage with every landed attack, or 2 from critical hits, causing fast attacks at range to become essential (such as the Space Gun with the full set of Meteor armor); thus, having a set of accessories with critical chance modifiers becomes far more important than damage, defense, or mobility, should it come to this.

Mobility and damage matter the most in these modes.

Near the dungeon, make two or three long rows of platforms, about one screen high and two screens wide. Use a horseshoe balloon and Spectre Boots or Lightning Boots, a combination that is essentially like wings in pre-hardmode. Featherfall Potion is also a plus. The Shield of Cthulhu is the last essential accessory. An optional item is the Umbrella if you can obtain it.

During the fight, use your platforms to move in circles around Skeletron, flying over and around him and running underneath. The Shield of Cthulhu will allow you to dash away from the skull and accelerate instantly.

The Bee's Knees and Bee Gun with the Hive Pack are especially effective weapons, as accuracy is not as important with these weapons. The Space Gun is another effective alternative.

This strategy only works on the Desktop and Mobile versions of Terraria.

Although this is quite cheesy, this strategy will one-shot Skeletron the moment he spawns if done correctly. 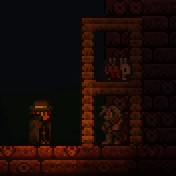 First, trap the Old Man in a box with an inner area of 2x3 blocks so he can't move from his spot. Then, right on top of it, build a second box with an inner area of 2x3 tiles, but leave the top open. Finally, fill the top box with 50 Explosive Bunnies, then jump out of it and make a roof for the box to prevent mobs from killing the bunnies. The finished contraption should look like the image on the right.

When the setup is complete, simply speak to the Old Man and summon Skeletron. If done properly, he should spawn right on top of the explosive bunnies and die instantly, even on Master mode. This also works on multiplayer.