Terraria Wiki
Register
Don't have an account?
Sign In
Advertisement
in: Guides subject to revision, Guides, Pages with template errors,
and 2 more
English

"This is going to be a terrible night..."

The Twins are the Hardmode version of the Eye of Cthulhu. They are part of the trio of the mechanical bosses, alongside with The Destroyer and Skeletron Prime. 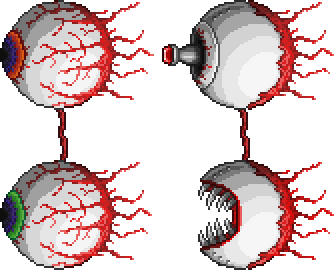 The Twins can be spawned by fulfilling either of these conditions:

The Twins must be killed before dawn (4:30 a.m.), otherwise they flee and despawn.

The Twins, as the name suggests, are two separate monsters, both of which must be defeated. They have a combined health of 43,000 / 64,500, shared between them. Retinazer is distinguished by its red iris and lasers, while Spazmatism can be identified by its green iris and cursed flames projectile.

When an Eye is reduced to 40% of their maximum health, it will transform, gaining a slight boost in offense and defense. Each Eye transforms independently once reduced to 8,000 / 12,000 HP (Retinazer) / 9,200 / 13,800 HP (Spazmatism); the other eye remains in its original form until it is reduced to the appropriate amount. When one is destroyed, the other will continue attacking in the same pattern.

In its first form, Retinazer will fire lasers at the player at a steady but somewhat slow rate. This is occasionally interrupted by charging attacks, which mirror that of its partner. Retinazer does slightly less damage than Spazmatism, but this is offset by its higher accuracy thanks to the speed of the lasers. When not charging, Retinazer will always be aligned diagonally with the player, positioned above them.

When it changes into its second form, it will no longer engage in charge attacks. Instead, its lasers will progressively fire at a faster rate as it loses health. This is occasionally supplemented by a weaker but much more rapid laser attack that tracks extremely well. To avoid this, try to fall as fast as you can, and you can be left unscathed. With wings it is possible to "zig-zag" up and down to dodge the lasers. This is made trickier as the fight goes on, with Retinazer using quicker lasers that are much harder to dodge.

Spazmatism, like Retinazer, alternates between firing Cursed Flames from a distance and engaging in charging attacks. The flames do more damage than the lasers, but are not as fast and thus easier to dodge. However, the Cursed Inferno debuff can be very dangerous for its high damage over time and its ability to stop health regeneration. Its charge attacks are faster and more agressive than Retinazer.

Spazmatism's second form changes its attack pattern dramatically. Its Cursed Flame attack becomes a constant stream of flame, which will last for several seconds (and deal large amounts of damage). However, it does not chase the player as quickly as it does in its first form, making avoiding the attack somewhat easier. Once it stops spewing flame, it will charge with greatly increased speed, which also does a lot more damage. Much like Retinazer, it is a good idea to fall as fast as you can while it is charging, and you should be okay. Redirecting Spazmatism's charges is easier than it sounds; if you jump as he slows down, he will charge over you. This causes Spazmatism to charge at you from either above or below, making him easier to dodge if you just run.

The Sky above the surface is highly recommended for the Twins arena, as vertical movement is required to dodge most of the attacks.

If a Mechanical Boss has been defeated,

Life Fruits will begin to grow in the Underground Jungle, increasing life by 5 per Life Fruit until the player reaches 500 health. It is recommended to get as much Life Fruit as possible.

Accessories that improve mobility are a must, since the Twins use quick attacks.

Demon Heart allows you to have 6 accessories,

This strategy requires you take out Spazmatism first. Once you defeat Spazmatism you need to get Retinazer into its second form. Then go inside a small box of solid blocks and use Summons (preferably with summon armor), the Meteor Staff or the Daedalus Stormbow (preferably with Holy Arrows and the Magic Quiver / its upgrades) to take down Retinazer. Because Retinazer does not charge in its second form and its lasers do not pierce blocks, you will be completely safe.

A helpful strategy is a Skybridge using a

Blessed Apple and any kind of yoyo (A

Yoyo Bag is recommended) or a long range weapon. Running with the Unicorn and shooting the yoyo behind you will deal a lot of damage, and you won't get hit very much as the unicorn is slightly faster. Warning: Using this strategy may lead to the The Twins despawning if you go too fast.

A strategy that is helpful for all classes is to use a minecart track extending as far as possible. For shorter minecart tracks, both ends can be hammered to allow the minecart to go in both directions without losing speed. As the minecart can go faster than The Twins, the player can use a long range weapon, such as a Repeater or a Yoyo (with

Yoyo Bag) to deal damage from a relatively safe distance. Warning: Using this strategy may cause The Twins to despawn if that player travels too fast.

After gaining access to the Tier 2 equipment sold by the Tavernkeep, The Twins becomes much easier to defeat. Wearing the Squire armor and using the Ballista Cane will give the best results because of the high defense and health regeneration provided by the armor, as well as the Ballista Panic! buff doubling the firing rate. Acquiring one of the accessories dropped by the Ogre is recommended for this method. When building your arena, be sure to use platforms whenever possible to maximize the opportunities your Ballistas have to fire. Make sure that you have Heart Lanterns and Campfires set up to give yourself the most health regeneration. Having a good pair of Wings, the

Cobalt Shield or its upgrades, and the

Terraspark Boots are recommended for maximum mobility. The

Summoner Emblem will make the fight go much faster, rounding out your accessories. A few

Greater Healing Potion are all the healing you'll need in case you get backed into a tight spot. Once the Twins have been summoned in, simply kite them around your Ballistas, taking damage periodically, preferably from Retinazer's laser for minimal damage. With the best Modifiers on your gear and all the relevant buffs, the Twins will go down in two to three minutes. If you find yourself taking too much damage and needing to heal more, consider swapping out the Summoner Emblem with a

Charm of Myths so you can heal more often.

After defeating a few Biome Mimics, you should have the

Target Dummies and a block overhead, you can make the invincibility machine. Get a

Slimy Saddle and try to bounce on both dummies while keeping it rapid. After you summon the boss, use the Fetid Baghnakhs to quickly take out Spazmatism. Then use the Daedalus Stormbow to beat Retinazer.

Note: In the 1.4 update, this glitch was changed to be much harder to pull off. Try this at your own risk, as it might not work.

It is very easy to defeat The Twins with The Black Spot. The only thing you need to defeat them is high, consistent damage until dawn. Keep in mind that circling around in the skies may summon a Wyvern, so it's nice to have a weapon against segmented enemies (such as the Medusa Head).

Note: The Black Spot was nerfed to be slightly slower in 1.4.1, which may result in taking more damage than intended.

Slimy Saddle. It works especially well to pair this with the

Meteor Staff, raining meteors down on whichever eye you happen to be bouncing on.