This page describes old game content that was removed or replaced.
The information here does not apply to the current version of Terraria. 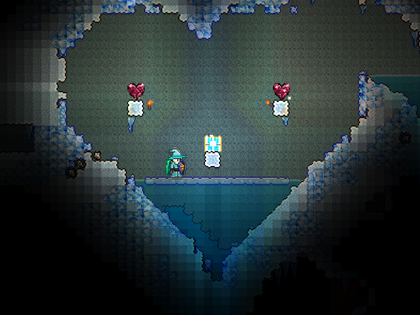 The Heart Shrine as it naturally appeared in-game (the left torch was re-placed by the player; both torches are attached to the Snow Blocks on generation). 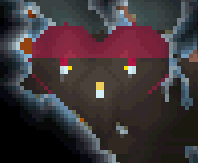 The Heart Shrine as it appeared on the map.

A Heart Shrine was an exclusive structure that occasionally generated in the Snow biome. Heart Shrines were roughly heart-shaped caves that contained two guaranteed Crystal Hearts, along with a Frozen Chest that contained several heart-themed items. They could spawn regardless of depth, allowing them to spawn on the surface. They were commonly found in the Ice biome and rarely in the Corruption/Crimson if a Snow biome was generated on top of it. The map showed the heart shape of a Heart Shrine by coloring the top half and a small bit of the outline red.