Heart Statues are a functional statue primarily used in boss battle arenas. When wired to a trigger and activated, the statue will spawn one Heart (which gives 20 health). During December 15th through 31st, it will spawn candy canes instead. Each Heart Statue has a cooldown period of ten seconds. It can be found Underground. 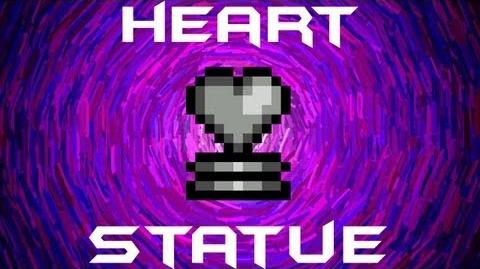 The Heart Statue is arguably one of the best health items in the game. To balance this, only three hearts can be spawned at one time in a small area. However, by scattering the statues, more hearts will be allowed to spawn. Sometimes when you use  them too frequently in a period of time, they will stop working.

The Heart Statue is most useful in Boss Arenas, where the player usually remains in a small area. However, one could position heart statues along frequently traveled paths, such as in a Hellevator. One could then stop at these "stations" when low on health.

Retrieved from "https://terraria.fandom.com/wiki/Heart_Statue?oldid=607147"
Community content is available under CC-BY-SA unless otherwise noted.