Hellstone Bar
Hellstone Brick
Flask of Fire
Obsidian Chest
Hellstone is an ore and material that produces the highest tier items in the game until you defeat the Wall of Flesh to activate Hard Mode. It is only found in the Underworld. Mining Hellstone now requires a pickaxe with at least 65% pickaxe power. The first pickaxe that can mine hellstone will likely be the Nightmare Pickaxe or the Deathbringer Pickaxe (The crimson equivalent to the Nightmare Pickaxe) although it is possible to find a Drax (with 200% axe and pickaxe power) in a shadow chest in the Underground Jungle biome. Hellstone can be smelted into Hellstone Bars at a Hellforge (spawned randomly in the Underworld), and as of 1.2.0.3.1, it requires only 3 Hellstone and only 1 Obsidian. Like most other ores and soils, it can also be crafted into a Hellstone Brick, but not into Hellstone Wall, at any furnace. When converted to Hellstone Bars, they can be used to create powerful new molten variations of weapons and armor. Hellstone deals 20 fire damage to the player (before defense) when they touch it, unless they wear an Obsidian Skull, Obsidian Horseshoe, Obsidian Shield, Ankh Shield, Obsidian Water Walking Boots, or use an Obsidian Skin Potion. Hellstone has no value when sold to Vendors, therefore the only way of profit out of them is to sell Hellstone Bars (Since Obsidian does not have sell value on its own too).

Mining Hellstone can be a pain, not only because Hellstone deals fire damage to the player on contact (which can be negated with an Obsidian Skull, Obsidian Water Walking Boots, Lava Waders, Ankh Shield and Ankh Charm); but mainly because of the dangerous monsters of The Underworld, as well as the fact that Hellstone spawns lava (half a block per block of Hellstone ore) when mined.

One approach to mining Hellstone can be to just drop down to the Hellstone/Ash "floor" and start digging out the Hellstone. One must keep in mind, however, that Hellstone Bars are very expensive and difficult to acquire as 3 pieces of Hellstone and 1 piece of Obsidian are required to forge only one bar.

A second strategy is to build a little box around the hellstone with a low tier block, then simply mine inside of that box staying as close to the box as possible so that the mined hellstone will still gravitate towards the player.

A third method requires several Obsidian Skin Potions. You may also want to use a Cloud in a Bottle, Rocket/Spectre Boots, Flippers, or a Grappling Hook. Find a pool of lava, use the potions and jump in. They are usually large. Simply use the Grappling Hook to stick close to the Hellstone while mining, escaping when the potion supply runs out. This technique will collect a decent amount of Hellstone.

The fourth method is to dig all around the hellstone leaving one layer of any block between the player and the Hellstone. Then grapple onto the block and mine through it, picking the hellstone up.

Lava Waders added in 1.2 are very useful when mining Hellstone, along with a Lava Charm.

Dealing with the Hellstone itself

As for dealing with the lava that is spawned when Hellstone is mined, you can use an Obsidian Skin Potion to negate damage from lava, as well as preparing a lava barrier to keep the lava from spilling onto you, and simply mine the Hellstone from behind the barrier. Prior to Update 1.1, you could also safely mine Hellstone by placing blocks of sand to soak up the lava formed as the Hellstone blocks broke. Another way is after mining, use a bucket and take the lava out.

Hellstone Bricks share a similar property, but do not produce lava when mined, instead only dealing contact damage. 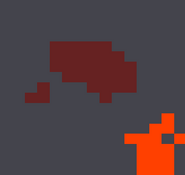 Hellstone viewed in the mapConsole
Add a photo to this gallery
Retrieved from "https://terraria.fandom.com/wiki/Hellstone?oldid=596623"
Community content is available under CC-BY-SA unless otherwise noted.