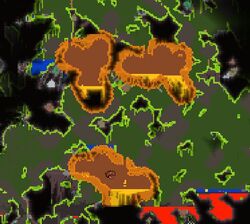 The Hive Biome is a biome introduced in v1.2. This biome is found in the Underground Jungle and is composed of Hive blocks and Hive Walls. The only liquid found in this biome is Honey. The Honey is a liquid that can buff the player while in it with fast health regen for a short period of time. Inside the Hive, one can find Larva Sacs, each containing a Larva, which will summon the Queen Bee boss if destroyed.

It is possible for several Hives to spawn in one jungle and also for two hives to merge on creation of the world.

The yellow part with yellow liquid is a Hive.

Two Hives relatively near each other.

2 Larvae Sacs in one Hive, meaning the player could fight the Queen Bee twice.

The hive near a glowing mushroom/jungle merge and lava.
Add a photo to this gallery
Retrieved from "https://terraria.fandom.com/wiki/Hive_Biome?oldid=592825"
Community content is available under CC-BY-SA unless otherwise noted.