A Hoik is a sawtooth series of sloped blocks, sometimes referred to as "teeth", which can rapidly move entities across distances.

When a character sprite shares space with a sloped block, the character is immediately displaced a couple of tiles in a predictable direction. By chaining these glitches together via a series of strategically-placed shaped blocks, entities can be moved rapidly in any direction over long distances. It becomes easy to achieve horizontal travel at 60 or 120 tiles per second, and vertical travel at 180 tiles per second, which is much faster than many of the other 'legitimate' forms of travel.

Hoiks are most commonly used as a method of fast travel. They also allow for the creation of mechanisms that may otherwise be impractical or impossible using standard game features, such as fast binary counters.

Hoiks have been possible since Terraria version 1.2 (which first introduced sloped tiles), though their utility to players was originally considered an exploited glitch. Since 1.3

, Re-Logic officially acknowledged Hoiks as a game "feature,"[1] meaning they are no longer considered an unintended benefit that might be repaired in future versions, and their functionality will remain in the game for the foreseeable future.[2]

A forum thread by ZeroGravitas was responsible for making the Hoik term and functionality known among Terraria fans, though there had been previous lesser-known exploits of this functionality. Much of the material presented in this article is based on research by ZeroGravitas.

Hoiks are based on the game's displacement system. When an overlap of block and entity is detected, the entity is displaced in order to resolve the overlap. For sloped blocks, the displacement direction is indicated by the location of the slope within the tile.

The game determines the displacement direction following these rules:

This behavior is visualized in the diagram on the right. The diagram was created by actuating a sloped block into existence behind the player's sprite, having started by standing in the middle of the 2 Glass Block base, in each case. Equally, the diagram shows the jump made by hammering a previously square tile into the depicted shape (while behind the player). 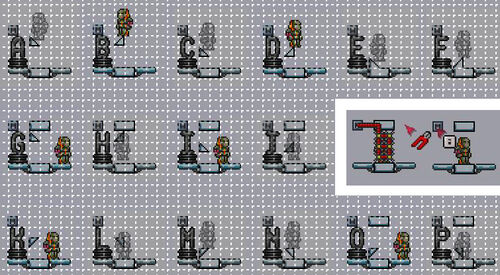 Hoik-useable instances are highlighted in color.

Terraria detects collision every tick.[3] Thus, stringing together a series of these displacements, with each jump landing the player on top of another sloped tile, creates a "track" which is capable of moving an entity at the speed of 1 displacement per tick, i.e. 60 displacements per second. This is the quintessence of a hoik.

A hoik is entered by positioning the (player) sprite in front of the first tooth. This can be achieved using the following methods:

Examples of upward hoiks without grid and wiring.

This elevator can be joined anywhere along its length. To bypass the sloped platforms (including avoiding fall damage), ▼ Down needs to be held while falling.

Sectional elevator (up one section per click). For a two-way use in a two-block wide hellevator, all teeth need to be actuated. If used in a three-block wide shaft, only the first tooth at each mounting point needs to be actuated.

Tooth spacing variations: A single gap can be left (e.g. to help adjusting the exact starting/ending points). One-tile gaps can only be used on alternate teeth, otherwise the entity's head will jam against the third tooth.

Tooth width variants: Stepping up through entirely solid rows (up to two tiles thick) is possible, e.g. to hold water, lava, or NPCs in place.

This hoik is mounted by walking past the entrance or holding ▲ Up while walking left.

Examples of downward and bi-directional hoiks.

Examples of downward and bi-directional hoiks without grid and wiring.

Hold ▼ Down while walking slowly through the sloped platform. Continue holding ▼ Down over the edge (otherwise the player will step up on top of the mounting tooth).

Mid-run mounting. (There is no known way to walk through a down hoik, like

in the diagram above, without actuating a tooth.)

Walk in from the left. The hoik uses inactive sloped block and ceiling. Like upward hoiks, every other downward tooth can have 1 vertical space, instead of 2, but the first gap must be 2 tiles high.

All tiles except the row directly below the each tooth can be filled in.

Actuated mount. The first tooth comes in as a block/platform directly underneath and is actuated out. Must be a one-tile gap beneath, otherwise the player will just step down.

Standard three-tile wide up- and downward hoik. Hoiking downwards places the entity on the platform at the bottom.

A four-tile wide shaft allows up- and downward hoiks to be entirely independent.

While all entities are moved from left to right here, the layout can be inverted to enable right-to-left transport. As soon as the entity is mounted, all tiles except the teeth are irrelevant. This allows a horizontal track through entirely solid ground. 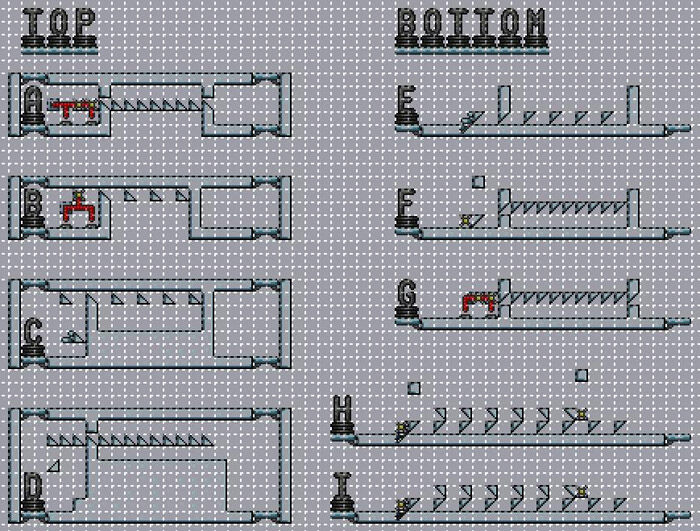 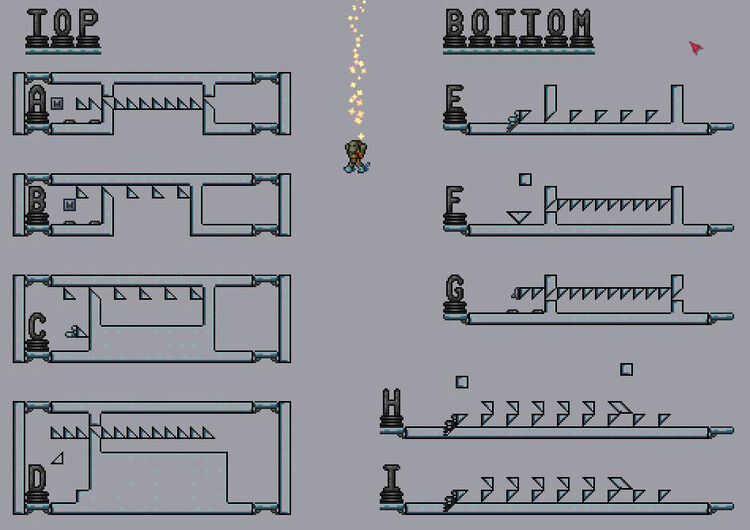 Examples of horizontal hoiks without grid and wiring.

All entities are moved along the ceiling, hence no floor is required. Actuated mounting variants are more space-efficient, thus shown first.

Waist-height, 1 tile/tick. Step-up elevator mount. (An elevator section of any length can be used, provided the last step up puts the player's head directly under (against) the ceiling.

All entities are moved along the floor, hence no ceiling is required (except for specific mounting instances).

Foot-height variant, 2 tiles/tick. To mount, hold ▼ Down before reaching the sloped platform (will walk over the top otherwise).

Waist-height teeth, 1 tile/tick. Inactive sloped block mount. Just walking towards it to mount is sufficient, as the block above prevents stepping up.

Waist-height, 1 tile/tick. Actuated teeth mount variant. Waist-height is preferable over actuated foot-height which will push up the sprite (unless a ceiling is placed) and requires more precise positioning.

Bi-directional, foot-height, 2 tiles/tick. Automatic mounting in either direction, just walk towards it.

Bi-directional, foot-height, 2 tiles/tick. The absence of ceiling in the mounting area here requires to hold ▼ Down while mounting, otherwise the player will just walk straight over the top, in either direction.

Dropped items can be hoiked, i.e. displaced due to overlap with sloped blocks, as well. While item transport is more limited than player and NPC transport, there are numerous common use cases, such as more efficient farms (e.g. an automated Fallen Star farm) or a Heart/Mana Star extractor for event fights.

Hoiks, although often used for item, enemy, or player transport - can have other alternative practical uses such as one-way walls, enemy traps, and more. These often include one or a combination of the Hoiks used for other purposes.

A hoik line of invalid platforms created by block-swapping.