This page is about constructing a home. For tips on defending one, please see the House Defense page. For the home page, see Terraria Wiki.

A Home is a safe place for players and NPCs where they can spend their nights without fear of attack. A home is typically also used as a player spawn point once a Bed has been acquired, and it may also be used as a place to store extra items for use at a later time. Each NPC requires their own room within a home, with a total of 23 rooms needed to house all of the NPCs as of patch 1.3.0.3 (one will only be occupied from December 15th to December 31st). Homes can be built almost anywhere in the world, though some locations are safer than others.

For starters a simple home built on the surface near a forest is a good choice. Typically, the first home that a player will build is nothing more complex than a single room with walls made of Wood, a Wooden Door for an entrance, and Wood Walls for the background. A Wooden Table, Wooden Chair and a Torch is enough to make the room suitable for the first NPC, the Guide, to live in. More rooms can be added to a home at any time, and Wood Platforms offer a good way to move between floors within a home. Once a player has explored the world and acquired more resources, far more elaborate and decorative homes can be constructed.

The housing menu is a feature first introduced in patch 1.1. It allows players to assign their NPCs to live in specific rooms and also to use the "housing query" option to check if a room meets the various requirements for an NPC to live there.

If an NPC's portrait does not show up on the right side of the screen when the housing menu is open, then either that world has not yet acquired that particular NPC yet, or the NPC is currently dead and will eventually respawn if there is suitable housing available.

The following table describes all housing query messages that the player may see, and provides a link to the related requirement(s). Note that some of these messages can be combined when multiple requirements are not met. For example, one may see a message such as "This housing is missing a table and a chair." The table below does not cover all of these combinations explicitly, so keywords are indicated instead.

These requirements are currently up to date for patch 1.1.2. For interested readers, the testing performed on NPC housing can be found in this blog post. See also: Bugs

This section lists all requirements that a room must meet for an NPC to be able to live in it. Note that for a player to set their spawn point with a Bed, only the Walls, Minimum Size and Background Walls requirements need be met. See also: Housing Query Messages 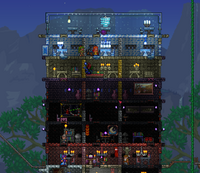 An NPC room must have walls defining its boundaries, without any gaps. Solid blocks (Dirt Block, Wood, Stone Block, etc.) are generally required for these walls. Wooden Doors may be used to form parts of the side walls. Wood Platforms can be used for the side walls, ceiling and floor, so as long as the NPC Block requirement is also met. NPC rooms are permitted to share common walls. If, however, you make both walls with doors in them, and the doors are open, you have to close the doors before the room is livable. Metal bars can be stacked to make interior walls. These are seen by the game as solid walls, even though players, NPCs, and monsters can simply walk through them. They do NOT count as doors though.

An NPC home/room must meet certain minimum size requirements. It must be at least 35 blocks large (excluding the bounding blocks that make up the ceiling, floor and walls) to be considered valid housing.

An NPC home/room cannot exceed 750 blocks in area. Exceeding this limit will render the room invalid, even if it has accomplished the other requirements.

An NPC room requires at least one placed light source in its interior. Note that many items give off Light, but do not count as light sources. Most light sources can be turned on/off using wires.

An NPC room requires at least one entrance. This entrance can be either a Wooden Door or a Wood Platform forming part of the walls. This requirement can still be met even if the player cannot physically enter the room through this entrance. Two NPC rooms are permitted to share a single entrance.

This is one of the more complex NPC housing requirements. All players are advised to pay special attention to this particular requirement.

An NPC room cannot have too much Corruption too close to it. A reasonable estimate is that no more than 49 corruption-type-blocks (Ebonstone Block, Ebonsand Block, Demonite Brick, corrupted grass, purple thorns, etc.) are permitted to be within a 42 block distance of the outer walls of the NPC room. This estimate may be slightly inaccurate, but it gives a rough idea of how much corruption is tolerable. It is technically possible to construct a small, suitable NPC house using walls of Ebonstone.

Note that the minimal distance required between an NPC room and the corruption is quite large, so players are strongly encouraged to be very aware of the surroundings near their house. Housing can easily fail to meet this requirement when corruption begins to spread in Hard Mode. This is especially true when it comes to underground housing, as it may be difficult or impossible to see the corruption underground.

Presence of The Crimson will also prevent housing from being habitable, though the message displayed will still read "This housing is corrupted."

The floor of an NPC room must have at least one solid block (i.e. not a wood platform), known as an NPC block, for the NPC to stand on at night. There must be at least 3 blocks of empty space above this NPC block (the ceiling must be 4+ blocks away). There must also be 2 blocks of horizontal distance between the NPC block and the side walls of the house (the left/right walls must both be 3+ blocks away)

Additionally, at least one Comfort Item or Flat Surface Item must be within 2 blocks of the NPC block. Furniture items cannot be placed on top of the NPC block itself though, as they prevent the NPC from standing there. Note: In an occupied house, the NPC block is the block over which the NPC's flag appears when the housing menu is open. 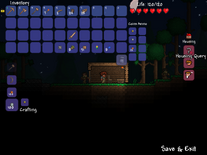 A very basic home and the housing menu. 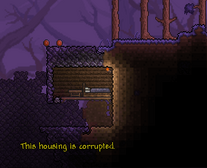 An unsuitable home, though the player can still set a spawn point. 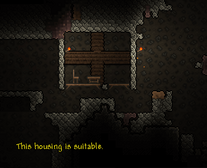 An underground home which just barely meets the requirements. 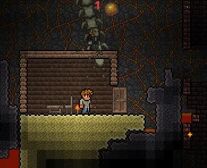 A home can even be made in the underworld.

a house that had no effort put into it