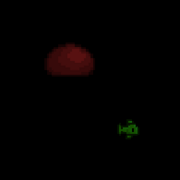 A Mother Slime (enemy) and a Goldfish (non-enemy) illuminated by the Hunter buff.

The Hunter Potion is a buff potion which grants the Hunter buff when consumed. The buff shows the location of enemies, critters, and undiscovered NPCs on the screen by highlighting them in red (enemies) or green (critters and NPCs). This lasts for 8 minutes, but can be canceled at any time by right-clicking the icon (

), by selecting the icon and canceling it in the equipment menu (

), by double-tapping the buff icon (

), or by canceling the buff from the buffs screen (

). Although the creatures glow, they do not emit any light to the surrounding area.

Aside from being crafted, Hunter Potions can rarely be found in Pots, chests, and crates. Additionally, they can be obtained as bonus drops from slimes on the