Snowman Cannon
4.4% - 7.52%
North Pole
4.4% - 7.52%
Blizzard Staff
4.4% - 7.52%
Baby Grinch's Mischief Whistle
0.95% - 1.67%
Reindeer Bells
0.56% - 0.83% (wave 15+)%
Ice Queen Trophy
25%/33%/50%
The Ice Queen is the final boss of The Frost Moon and is the Frost Moon equivalent of the Pumpking. She appears at wave 11. The Ice Queen attacks with three phases. First, it will float above the player and shoot ice shards downwards. Second, it can spin around while quickly shooting frost shards that go in random directions. These frost shards do decent damage, and if many of them hit the player, there's a big chance he/she won't survive. Another phase is that it can shoot frost waves that have high velocity and can go through blocks while swooping back and forth, sometimes hitting the player with melee. The frost waves do high damage and are fired at a fast rate towards the player, so players might find this phase difficult. The Ice Queen can inflict the Chilled debuff and the Frozen debuff that makes the player frozen solid for 2 seconds. Those debuffs are a great opportunity for the Ice Queen and other Frost Moon monsters to kill the player. 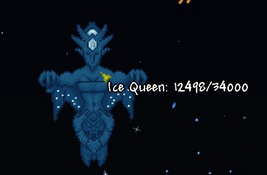 One of the attack modes of the Ice Queen

Six Ice Queens that spawned at the Final Wave of the Frost Moon
Add a photo to this gallery
Retrieved from "https://terraria.fandom.com/wiki/Ice_Queen?oldid=594158"
Community content is available under CC-BY-SA unless otherwise noted.