Statistics
Sounds
Not to be confused with Heart.

Up to 15 Life Crystals can be used per player, increasing health capacity by 300 (15 hearts). Added to the 100 health new players begin with (5 hearts), a total of 400 health (20 hearts) can be achieved. Additional Life Crystals can no longer be used at that point, and attempting to do so will not consume the item.

Life Crystals can be found naturally placed in any area in the Underground layer and below, though they are fairly uncommon. They cannot be found in the The Underworld or the Dungeon, unless on

After a world converts to Hardmode, and after the 400 health maximum is reached from consuming Life Crystals, Life Fruits can then be used to increase health capacity further, to a maximum of 500 (20 Life Fruits). 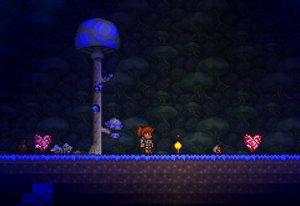