Mythril Anvil
Orichalcum Anvil
The Light Disc is a thrown melee weapon that stacks up to five, meaning up to five can be thrown at once (although this requires the crafting of five separate light discs). Its range is the longest of all thrown weapons. When thrown, it emits a miniscule amount of blue light. The Light Disc will bounce when it hits a wall. If used in an enclosed area, it can bounce rapidly, making it extremely hard to dodge, this makes it quite an effective weapon.

The Light Disc has extended range when wearing armor that grants a melee speed boost. When wearing Hallowed Armor, the weapon can be thrown for about fifty blocks. 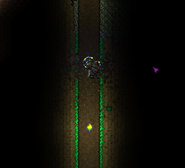 Light Discs going through the ground
Add a photo to this gallery
Retrieved from "https://terraria.fandom.com/wiki/Light_Disc?oldid=595281"
Community content is available under CC-BY-SA unless otherwise noted.