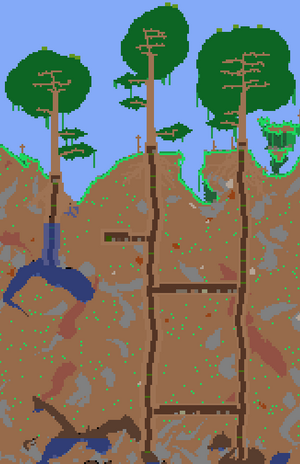 Map view of three Living Trees, two of which are interconnected with tunnels.

Living Trees are large tree-shaped structures generated at world creation. Unlike regular trees, Living Trees are constructed from foreground Living Wood and Leaf Blocks, rather than being background objects that characters can pass through.

Mobile version, Living Trees have larger and rounder tops and can generate in groups. They also have horizontal tunnels that can connect to other trees or lead outside of them. Chests can be generated inside these tunnels. One of the trees will usually have the treasure room, which contains a Living Loom along furniture and a Living Wood Chest. The entrance to their internal tunnels are enclosed, requiring a pickaxe to enter them. Gnomes can also be found more often within Living Trees.

Smaller, Living Mahogany Trees are found deep in the Underground Jungle. They are always hollow with an Ivy Chest at their base, containing Jungle Shrine items.