Desktop/Console/Mobile-Only Content: This information applies only to the Desktop, Console, and Mobile versions of Terraria.
Logic Gates

Example of the logic gate AND.

A Logic Gate is a mechanism used to provide logic to wiring setups. Input is provided using a stack of Logic Gate Lamps placed on top of it. The logic gate turns on and off depending on its inputs, and emits a signal every time its state changes.

The logic gates, along with the Logic Gate Lamps, are purchased from the Steampunker for 2 each.

All gates are turned off when they are first placed. Whenever a lamp is added or removed or one of its lamps changes state, the logic gate updates according to the following rules:

Placing a faulty logic gate lamp above a logic gate turns it blue, overriding its normal functionality and changing its behavior entirely. The logic gates function as a randomizer instead, and can no longer turn on or off. The gate no longer emits signals when normal logic lamps above it change state. Instead, when the faulty lamp is triggered by a signal, it randomly selects one of the logic lamps below it. If that lamp is on, the logic gate emits a signal. So, if there are three lamps below the faulty lamp, two ON and one OFF, the gate has a 2/3 chance to emit a signal when the faulty lamp is triggered.

A faulty lamp can be triggered multiple times in one tick, effectively giving the gate multiple chances to emit a signal. Multiple signals cannot be emitted on the same tick this way, however, the gate will have a chance to emit a signal for every time a faulty lamp receives a signal. For example, if you trigger a faulty gate with one out of two of its logic gate lamps on twice in the same tick, it will have an 3/4 chance of emitting a signal.

Since gates emit a signal whenever they either turn on or off, the "inverted" versions of each gate (those with an "N" prefix) behave identically to their normal counterparts in most situations. The only difference is when the first lamp is added to a new gate. (For example, both the NAND and AND gates start off when first placed. However, upon adding an off gate, the AND gate would stay off and emit no signal while the NAND gate would turn on, thus emitting a signal.)

A toggle flip-flop is a device with one input and changes state every other input. The device consists of a faulty logic gate lamp, a logic gate lamp, and a gate. It is particularly useful when utilizing sensors to toggle activations without having the sensor's ending pulse turn off the device.

A set/reset flip-flop is a device that has two inputs, and can be switched between the two. However, multiple activations on the same input will not change the state. It will output a pulse when the state changes. In the illustration, red and green are the inputs, and blue is the output. 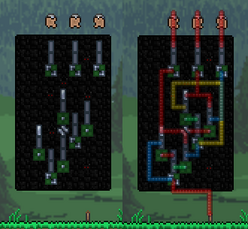 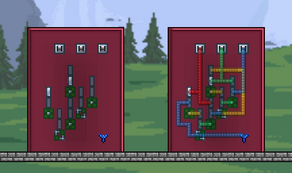 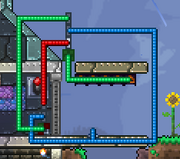 Simple switch to turn traps on/off. Uses two logic gates: AND (3 lamps), and XOR. Switch and pressure plate connected to XOR gate to reset AND gate after each use, so the trap would be activated every time the plate is triggered as long as the switch is not active.