30
The Lost Girl is a monster that can spawn rarely in the Underground and Cavern layers. When the player gets too near, she quickly changes form, becoming a Nymph. New players often get fooled by her name and appearance, and approach her in the hopes of getting a new NPC. However, her second form, the Nymph, is quite strong (300 HP) and her strong attack power (29) can easily kill an unprepared player.

Nymph trapped at the bottom of a hellevator. Slowly being killed. 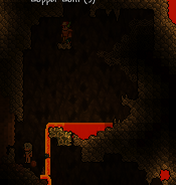 A rare occurrence of a dual Lost Girl spawn

Lost Girl appearing in the Cavern Layer near some Lava.

Achievement gotten for defeating your first Nymph.
Add a photo to this gallery
Retrieved from "https://terraria.fandom.com/wiki/Lost_Girl?oldid=590861"
Community content is available under CC-BY-SA unless otherwise noted.