Desktop/Console/Mobile-Only Content: This information applies only to the Desktop, Console, and Mobile versions of Terraria.
Magic Droppers

Magic Droppers are items used to place "droplets" — dripping liquid effects on ceilings. Once placed, they permanently display an intermittent dripping effect. The effect is purely visual, and has no functional use. Magic Droppers are crafted with an Empty Dropper at Water, Lava, or Honey, with the Crystal Ball nearby.

To apply the effect to a block, click the area just below that block. Droppers do not require any form of ammunition or liquid to use once crafted. Droplets can be removed by mining them with a pickaxe (no item drops when they are removed).

Droplets are also naturally generated in random areas on world generation. They spawn below ceilings that have their corresponding liquid above them, as though that liquid were "leaking through". Natural droplets can be mined just like the player-placed version, and similarly drip indefinitely until removed by a player. 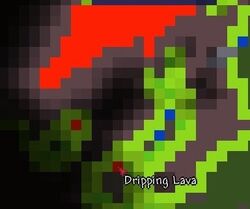 "Dripping Lava" tooltip on the map.