A Meteorite falling is announced in the bottom-left of the screen with the message, "A meteorite has landed!" This event will always occur off-screen — a player can never witness the actual impact.

The Meteorite itself is normally made up of approximately 350 blocks of Meteorite Ore, but this largely depends on where it lands. In particular, if the Meteorite spawns on a Skybridge, it will only cover a width of ~20 blocks through the depth of the Skybridge.

The ore found in this biome requires a Platinum or Gold Pickaxe or better (or Explosives) to mine, and inflicts 5 damage per second (not affected by defense) and the On Fire! to players who directly touch it. This damage can be nullified entirely by equipping an Obsidian Skull, Obsidian Shield, or Obsidian Horseshoe, or by drinking an Obsidian Skin Potion or with Lava Waders.(not Hardmode.)

A really easy way to find one is using the minimap, and then when one lands, you can press M to try to find where it is.

No more meteors will fall if a certain amount of meteorite is present in the world. (See notes)

When approaching a Meteorite crash site, Meteor Heads will spawn (though not from the actual Meteorite) in an attempt to hinder your excavation of the Meteorite, and the game's music will change to the Underworld theme. When there is less than 50 Meteorite Ore, the Meteor Heads will stop spawning, indicated by the music returning to normal.

A Meteorite has a 50% chance to spawn the midnight after a Shadow Orb/Pulsating Heart is destroyed in the world (or immediately if the orb/heart is smashed after midnight but before dawn). So in order to maximize the amount of meteors that land on your world, only one Shadow Orb or Pulsating Heart should be destroyed every night. Destroying 5 Shadow Orbs in one night for example will not spawn 5 meteorites in your world but will most likely spawn only one.

In addition, every night after the first Shadow Orb/Pulsating Heart is destroyed has a 2% chance of having a Meteorite spawn so long as the amount of Meteorite Ore in the world is below a certain threshold. This means that any meteorite should be mined as soon as possible to maximize the amount of meteors that spawn. 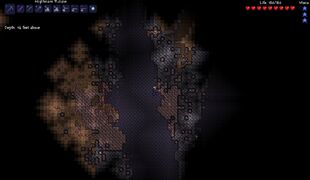 Meteorite in the middle of a chasm. 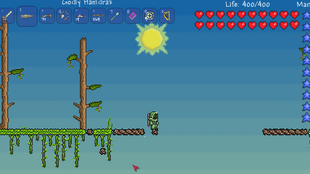 A "meteor crash" on a jungle skybridge. 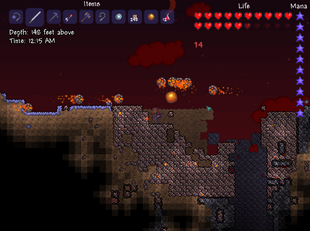 A meteorite in the corruption during a blood moon. 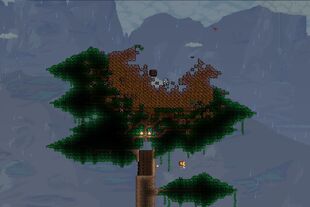 Meteorite landing on top of the Living Wood Tree 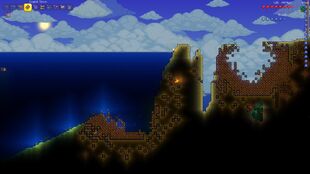 2 meteorites landed close to each other in the ocean 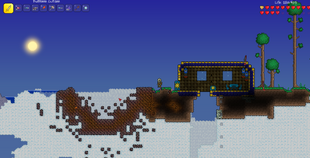 A meteorite on a floating island 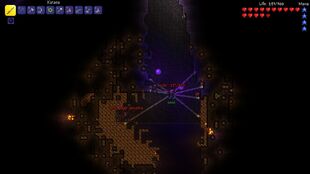 Meteorite deep inside a chasm 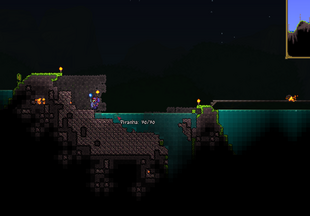 Piranha spawning in a Metorite Biome 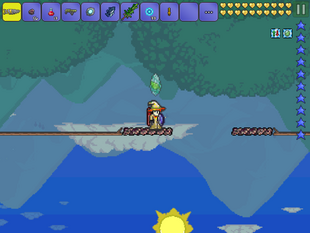 A 'meteoraite crash on a platform Skybridge upside-down
Add a photo to this gallery
Retrieved from "https://terraria.fandom.com/wiki/Meteorite?oldid=597996"
Community content is available under CC-BY-SA unless otherwise noted.