Pressure Plate Track
Minecart Track is a transportation block much like Rope for horizontal movement.

Minecart tracks are placed in the Furniture layer, the same layer as Chain, Torches, Platforms and so on. They have a +5 placement range. Crafting track is extremely efficient, granting 50 pieces for only 2 common resources. Track does take up one full square and the cart with character will take up 3 tall, requiring a minimum of 4 blocks of space for use of a track.

Initial placement will yield a "stop" piece on ends of track and hammering will alter the end piece to either a "bumper" or rail "drop".

Hammering a non-end piece of track will not change the track unless another track is in an adjacent, diagonal cell, to which it will change which track is connected.

Other track pieces exist, such as the Pressure Plate Track for wiring mechanics, and Booster Tracks.

Minecarts are produced upon right clicking on a track or pressing the quick-mount hotkey when standing on the track, and the player is automatically placed inside. Acceleration in a cart is low, but top speed will bring a character to ~80% top character possible speed. (It is unknown whether a character's speed buffs affect minecart speeds.) The cart will hop when a character jumps, and will slow when a player attempts to go the opposite direction of current travel. The great benefit of a cart is its ability to keep moving along the track even when a player releases the controls.

To dismount or exit a minecart, left click with any item or press the quick-mount hotkey again. Moving from a derailed cart will automatically remove the cart. Another easier way to exit a minecart is to cancel the "Riding in a Minecart" buff / status effect.

Minecarts can deal substantial damage to monsters when traveling fast enough. A character is still vulnerable while in the cart and will take collision damage from monsters. If the monster is killed, the character does not take damage. The cart also does not protect a rider from fall damage except where the cart lands on rails. The cart does grant immunity to knockback.

Minecarts are able to trigger pressure plates and can get teleported. They can only move when placed on Minecart Track.

Since v.1.3 it is possible to craft Minecart at Iron Anvil (or Mythril Anvil) from: Any iron bar (15) + Any wood (10). Which (if equipped in Minecart slot) makes it possible to ride it and gives increased maximum speed (66mph vs 51mph of a stock minecart). Buffs like "Increased movement speed" from "swiftness potion" will not increase maximum minecart's speed (which can be verified with Stopwatch bought from Travelling Merchant). 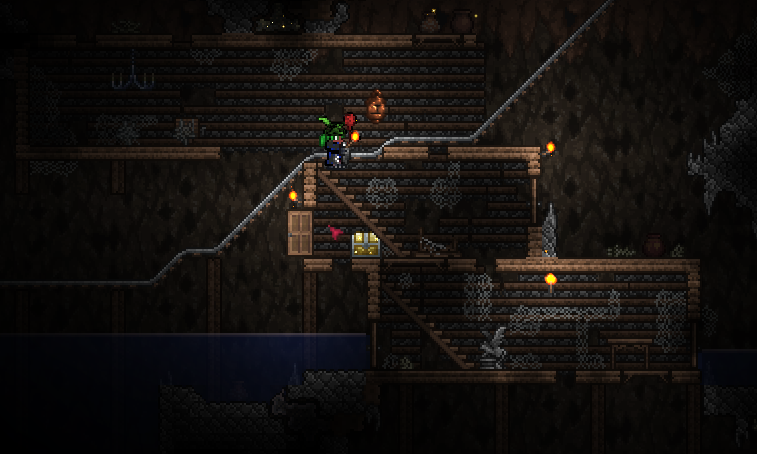 Retrieved from "https://terraria.fandom.com/wiki/Minecart_Track?oldid=583563"
Community content is available under CC-BY-SA unless otherwise noted.