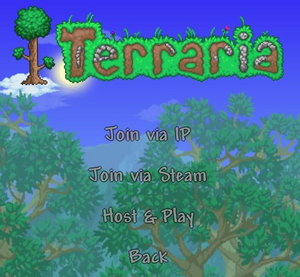 Multiplayer is a game mode in which Terraria can be played with or against other remote players. Multiplayer games are cooperative by default, with player versus player (PvP) available for activation once a multiplayer game is entered.

There are two types of multiplayer environments: Server and "Host & Play".

Player versus player (PvP) is a multiplayer mode that allows players, or teams of players, to attack each other. PvP is activated by joining a multiplayer world and enabling the PvP option by clicking on the crossed swords   near the armor and accessory slots /   in the PvP menu found in the inventory. In the   Desktop version and   Mobile version, the only way a player can damage another player is if both players have the PvP option enabled, or through traps such as Boulders, Land Mines or Lava.

There is also the option of joining a team. Teams are represented by the colored icons near the armor and accessory slots. Once a team is selected, there is an on-screen display providing information about the distance (and direction) and health of the teammates. PvP players on the same team can see each other on the minimap, while other PvP players cannot.

If a player has equipped or is holding an informational item such as the PDA , any teammates standing near them can also see the data readout from it.

PvP players can play Capture the Gem, which operates similarly to Capture the Flag. Capture the Gem requires Large Gems, one for each team, which can be crafted using 15 Amethyst, Topaz, Sapphire, Emerald, Ruby, Amber, or Diamond. Teams attempt to steal the opposing team's gem and bring it back to their own base. Large Gems display as hovering graphics over any player carrying one, and always drop next to killed players, regardless of their character's difficulty setting.

The Large Gems can be held in their respective holders, instead of having a player hold them.

Desktop/Console/Old-gen console/Mobile-Only Content: This section's information applies only to the Desktop, Console, Old-gen console, and Mobile versions of Terraria.

These items can only be obtained in multiplayer. However, once the items are obtained, they can be transferred to a singleplayer world.

Wormhole Potion  only drops from Pots if the game is in multiplayer (even if the player is the only one playing at that time), but they can always be crafted, even when playing on singleplayer. Despite that, they're unusable when playing alone, so it could be considered that their usability is multiplayer-exclusive and depends on having other player(s) on the same team. When you're playing on singleplayer, or in multiplayer outside of any teams,  Team Dye  also has no use, and will work as having no dye —  Team Hair Dye  will dye the hair white instead.