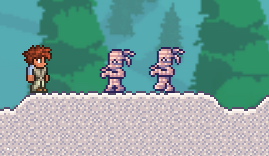 A player being approached by two Light Mummies.

Mummies are Hardmode Desert enemies. They spawn in areas where Sand Blocks are present, and follow the Fighter AI (behaving similar to Zombies).

There are several different versions of Mummies: Dark Mummies, Blood Mummies and Light Mummies, who spawn in Corrupted Deserts (and

Dark Mummies are 150% faster than other Mummies. All mummies receive a 200% speed increase when they are reduced to 50% health or lower. In addition, mummies inflict the following debuffs: