A Non-Player Character (NPC) is an automated character that provides a service to players. They are a kind of reward for achieving certain feats in Terraria, such as collecting items, defeating bosses, and exploration. Most NPCs are vendors, selling items in exchange for coins, and vice versa. Exceptions are the Guide, Nurse, Old Man, and Angler. A player can utilize NPCs by standing near and right-clicking on them. NPC General Details

NPCs share many of the stats of a player character. They occupy 3 blocks tall and 2 blocks wide. They are slightly slower than a player and can only jump 3 blocks high; they have 250

and can take damage from monsters (with exception of the Old Man). As of 1.3, each of the NPCs can use a different attack to fight against monsters. Their health automatically regenerates over time. All NPCs (excluding the Old Man and Santa Claus) have randomly chosen names. Many of the names are references to well-known characters from Legend, or in some cases Deities, or Higher Powers of some Religions. Some are even references to well-known games or films.

A list of all currently gained NPCs can be found by entering the inventory screen (default Esc.), then press the house symbol above the armor. To place an NPC in a specific room, left click the portrait of the NPC and then left click room desired, leaving the NPC's banner in the clicked space if the housing is adequate. Clicking on the "question mark" box will allow the player to click on a potential NPC house and tell the player what the house still needs to be ready. If the housing is not enclosed properly then it will simply state that the house is not suitable; otherwise, it will state that the house is suitable. When Night begins, NPCs will walk to their respective banner remaining there until dawn at which point they will walk around and go through doors. If an NPC can't reach its house then when all players move away from it and its house the NPC will automatically teleport to its house. They also go to their houses when it's raining and only come out again when the rain stops (unless it is night time). NPC's will close doors they opened and leave doors alone that was open, to begin with.

All vendors will purchase items for the same prices, regardless of what they sell. All purchasable items are worth five times more when bought from the NPCs than when selling them to the NPCs. Items sold to NPCs may be re-purchasable at the same price sold until the player closes the shop screen.

To spawn all but three of the 25 NPCs (the Guide, the Old Man, and the Travelling Merchant) the player must build a suitable 10x6 home. This consists of a light source, flat surface item, and comfort item enclosed by blocks with a door or platforms to access the outside and proper walls. Furthermore, each NPC has one other unique requirement for spawning which is listed below (more information in the home page). This doesn't exclude the guide, who still requires the same to respawn should he die. NPCs will only spawn during the daytime. NPCs will not spawn during an event or if the house is in an area affected by too much Corruption or Crimson.

When all NPC requirements are met and suitable housing is available, the available NPC will spawn and a banner will appear in the occupied room. Upon spawning a text notification will display:

Multiple NPCs can spawn on the same day. If the housing location is in view of the player, the new NPC will respawn slightly off screen, otherwise, it will spawn in the available housing. A killed NPC will respawn the following day and move back into its house (provided it still meets the requirements). If a house occupied by an NPC is destroyed, the NPC will move out, but will walk around in the same area and will no longer stay still at night until the house is restored or a new one is built.

The following NPCs are listed in alphabetical order. NPCs are not gained in a specific order. Click on an NPC's name or image to get more information.

All NPCs require standard suitable housing. A few may have special requirements for housing beyond the standard.

Here is a link on how to get every NPC currently available in the game. https://www.youtube.com/watch?v=hJdXDwT79-E 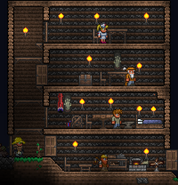 An inn you could build for NCPs
Add a photo to this gallery
Retrieved from "https://terraria.fandom.com/wiki/NPC?oldid=600538"
Community content is available under CC-BY-SA unless otherwise noted.