The Ocean is a large, deep body of water that always spawns at both ends of a world.

Oceans are biomes that spawn only at either end of a world. Typically, the background will change to sandy islands sparsely overgrown with palm trees and appear to be partially submerged. Oceans always reach the end of the map, however, they usually will not extend past it.

When the player reaches the ocean proper, the ground will usually change to sand, however, unlike deserts, there will not necessarily be cacti. The sand will rapidly drop off into the water, and any submerged sand blocks may have coral growing on them.

Chests found at the bottom of the ocean tend to contain water-related items such as breathing reeds, flippers, or tridents more often than chests in other biomes.

Mobs exclusive to the ocean include:

Oceans are also far enough away from the original Spawn Point that it is possible for goblin scouts to appear in or around them, as well.

Through experimentation, it has been determined that it is possible to create a fully functional artificial ocean. For an area to be considered an ocean, it must meet the following requirements:

Without water, an Ocean becomes a Desert.

2 meteorites landing in the ocean.

An old style underground house which has generated into the ocean.

new style house in the ocean.

Ocean shore overlapped with the Jungle. 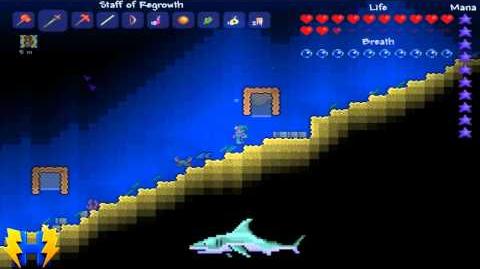 thumb|The background in v1.2
Add a photo to this gallery
Retrieved from "https://terraria.fandom.com/wiki/Ocean?oldid=590614"
Community content is available under CC-BY-SA unless otherwise noted.