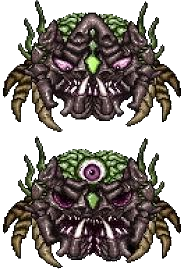 ℹ️
100%
10-38 Adamantite Ore
100%
13-30 Souls of Blight
100%
5-15 Lesser Healing Potion
100%
~28 Spectral Arrows
100%
Any Part of
Dragon Armor or Titan Armor or Spectral Armor
11%
Ocram Mask
14.29%
Ocram is the final boss in the console and Mobile Version of Terraria. To summon him, you will need to use the Suspicious Looking Skull at night. You must defeat all three mechanical bosses before summoning this boss.

Ocram's attack style is very similar to that of the Eye of Cthulhu. Like the Eye of Cthulhu, it charges repeatedly at the player while summoning servants. Additionally, it fires numerous red laser beams. After damaging its health to 50%, it will (like most bosses) switch into its second mode, where it continues to summon servants, but will charge constantly and the lasers change to a purple, more deadly laser which begins to spread out. Ocram also uses the Demon Scythe spell summoning several demon scythes at once doing a fair amount of damage.

The following strategy is by far the easiest way to defeat Ocram in approximately 3 minutes.

During his first phase just stand completely still and aim for his mouth, he will charge you and keep summoning servants. After you damage him enough he will go into his second phase. Now move left and right so that he charges at you horizontally (this giving you more time to shoot him) since he is not under you. He should go down in a matter of 4 minutes or less.

One strategy is to simply let the Servants of Ocram stack up on you and attack the main boss with the strongest spear you have. If this is done correctly, none of the servants will be able to hit and you will avoid taking any damage from Ocram itself.

Another strategy for defeating Ocram with only melee is by using the formidable Excalibur/Tizona swords. In his first form, Ocram continuously hovers over the player to stay above them. You can attack him with a sword however by flying slightly to the left or right of Ocram. If done precisely, Ocram will attempt to keep up with you as you fly higher and higher, which should (if he is targeting you) leave him sitting right in front of you. This leaves him open for melee attack. When your flight height is reached, simply fall back to the ground and repeat this tactic. This unfortunately does not work so well after Ocram has transformed, but it is a good strategy to rack up lots of damage. The Excalibur/Tizona is needed for this strategy so that the player can attack Ocram facing one direction while flying backwards in the other direction.

Another strategy can be used to kill Ocram, is the way you can kill The Twins.

Retrieved from "https://terraria.fandom.com/wiki/Ocram?oldid=578997"
Community content is available under CC-BY-SA unless otherwise noted.